On the occasion of the United Nations conference for biodiversity in Montreal,This is the case of the copper redhorse, a fish that only exists in the Canadian province. 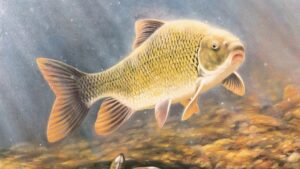 The copper redhorse is a species of fish found only in Quebec. (SNAP QUEBEC)

On the banks of the St. Lawrence, in Contrecœur (Quebec), about fifty kilometers from Montreal, an informative panel tells the “fight of the copper knight”. However, there is no question of jousts or medieval epics. The redhorse in question is a large fish weighing 5 kg and 70 cm long, which only exists in Quebec. His fight is sadly banal in a world disrupted by human activities. The redhorse, “the first wildlife species to be designated” by the Quebec government in 1999, is fighting for its survival.

Advice is written on the sign so that anglers do not accidentally catch the noble animal. Boaters are invited to reduce the speed of their boat when approaching the seagrass beds, the “real pantry” of this mollusc enthusiast. The text also explains that Moxostoma hubbsi, its scientific name, is found “in areas that have retained their natural state”. 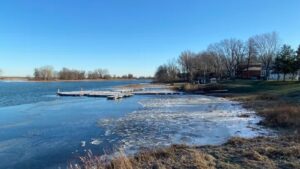 Yet, a few kilometers upstream, the Port of Montreal plans to build a new terminal that encroaches on the copper knight’s living space. The destruction of natural environments is one of the main causes of the disappearance of biodiversity, a major crisis that is on the menu of the COP15 organized until December 19 in Montreal.

A fish “on the edge of the abyss”

The Society for Nature and Parks (Snap) of Quebec took advantage, Saturday, December 10, of this news to denounce the situation. In a full-page advertisement published in the daily Le Devoir, the NGO regrets that the copper redhorse is today “threatened by a large port”. For its general manager, Alain Branchaud, this project puts yet another pressure on a fish “on the edge of the abyss”, which would only have a few hundred specimens left. “If I give you a hammer blow to the head, you will turn around and groan. If I give you a second one, you may fall to the ground. A third, you will lose consciousness and a fourth, you will will be dead”, describes the one who worked on the species when he was a biologist for the federal state. And the specialist lists these successive “blows” suffered by the fish: commercial fishing (now prohibited), pesticides, dams on the Richelieu River where it reproduces…

A particularly critical opinion (PDF) about the new terminal was written by Alain Branchaud and three other scientists. This fish has already regressed a lot, and probably because here, you have 26 km of port”, explains one of them, Pierre Dumont, his finger on the north shore of the St. Lawrence, upstream from Contrecœur. The ichthyologist (fish specialist) also fears the consequences of the dredging of the bank, the passage of boats – “bulldozers of 12 meters” – and the lifting of polluted sediments generated by all this activity.

Wearing ensures the impact will be minimal

Opposite, the Montreal Port Authority highlights the authorization obtained in March 2021 from the Ministry of Environment and Climate Change of Canada, at the end of a “five-year” study. Nathalee Loubier, environmental manager of the Contrecœur project, ensures that everything is done to minimize the impact on fish, of which only 0.003% (one hectare) of the protected habitat is concerned. “The project has been moved a little further west of our property to do avoidance,” she says.

Above all, the port is banking on compensation. This principle in vogue among companies consists of rebuilding elsewhere what has been destroyed in one place. “We are going to create new herbaria, launch a program to improve the quality of the Richelieu River [where the fish breeds], raise awareness among river users in the area and fund new research,” says Nathalee Loubier. The terminal should come into operation at the end of 2026.
The copper redhorse can live up to 30 years and weigh up to 5 kg. (MFFP) 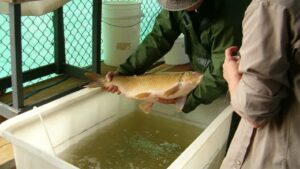 The copper redhorse can live up to 30 years and weigh up to 5 kg. (MFFP)

These arguments do not convince the opponents. “It’s playing the sorcerer’s apprentice. If there was room for other herbaria, the Saint-Laurent would have already created them”, believes Pierre Dumont.

The former official points to a timing problem: “It’s in twenty years that we will know if these compensation measures have worked. If it doesn’t work and the port is built, we can’t go back.” In his report on the project, co-authored with his colleagues, he concluded with his colleagues: “We do not have the luxury of being wrong on this file”.

Today News Post - November 1, 2022 0
After four years in power of Jair Bolsonaro, Lula's election is seen as "a good signal" for the planet. The figure of the Brazilian...