The Colombian government announced on Sunday that it had concluded a six-month “bilateral” ceasefire with the main armed groups operating in the country. 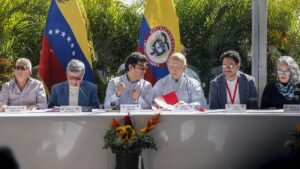 The Colombian National Liberation Army (ELN, Guevarist) guerrillas on Tuesday denied any bilateral ceasefire with the government in Colombia. “The ELN delegation has not discussed with the government of Gustavo Petro any proposal for a bilateral ceasefire, so there is still no agreement on this issue,” said this rebel organization in a statement posted on social networks and signed by its “central command”.

On Sunday, the government announced that it had concluded a six-month “bilateral” ceasefire with the five main armed groups operating in Colombia, including the ELN, with which it is engaged in new peace negotiations. “We have repeatedly stated that the ELN only complies with what is discussed and agreed at the dialogue table in which we participate. A unilateral government decree cannot be accepted as [constituting] an agreement”, asserts in its press release the last guerrilla constituted as such still active in this country.

“During the last round of negotiations which took place in Venezuela and which ended on December 12, only what had been announced (…) was the subject of an agreement”, while “Adjustments were made to the agenda and submitted for consultation, both to President [Petro] and to the central command” of the ELN, explains the latter. A next round of negotiations is due to take place soon, on a date not yet known, in Mexico, where “it was agreed to complete the adjustment of the agenda”, still according to the ELN.

Today News Post - October 31, 2022 0
A new bill to ban bullfighting was tabled on Tuesday in France. In other countries where bullfighting is a tradition, such as Spain, Colombia...