How to explain the disappearance of tens of hectares of trees in France? It would be a large-scale traffic, partly destined for China. 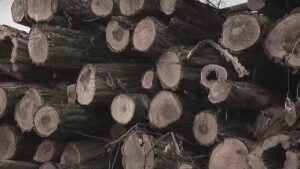 Three hectares of private forest were ravaged near Lyon, in the Rhone. The cutting of wood was carried out in January by Polish loggers, without the agreement of the owner. The latter has lost several dozen acacias and American oaks, whose prices have doubled in recent years. His neighbors were also targeted. The town hall estimates the damage at 33,000 euros. The wood was reportedly sold to a Polish company. The court closed the case for lack of evidence.

Over the past few months, half a dozen similar cases have taken place. In Thionville (Moselle), the trial of a former leader of a forestry group was held at the end of October. He would have bought plots of forest and cut those of his neighbors without authorization, thus amassing a fortune. The damage is estimated at 500,000 euros. According to investigators, some of the stolen wood was sent to China, the new Eldorado of French oak. The country absorbs a third of the French market. Since 2017, in the face of deforestation in China, Beijing has banned oak cutting for 99 years.

Today News Post - November 20, 2022 0
If Emmanuel Macron has warned of a potential decline of the Francophonie around the world, French remains the fifth most spoken language with 321...