The Ukrainian President was in Washington on Wednesday, December 21, for the first time in 10 months of war against Russia. All honors were paid to him at the Congress on this occasion. 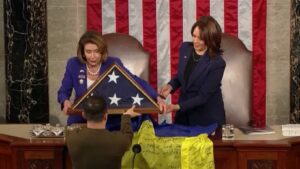 Dressed in his traditional khaki outfit, Volodymyr Zelensky entered the US Congress to a standing ovation from the parliamentarians, who stood for long minutes. “Russia could stop its aggression if it wanted to, but you can hasten our victory,” the Ukrainian president said. For 20 minutes, he gave a speech, sometimes interrupted by applause. He thanked America for its help.

At the end of his speech, it is a strong moment when Volodymyr Zelensky offers a Ukrainian flag to the elected officials signed by the soldiers who fight in Bakhmout, the most difficult point of the front. In return, the Speaker of the House offers him an American flag. For his first trip abroad, Volodymyr Zelensky was received with honors by Joe Biden. At the heart of the discussions, always arms deliveries. The two men exchanged moments of complicity sending a message for Russia: America will stand with Ukraine.

Today News Post - December 20, 2022 0
The shock, relatively shallow, occurred about forty kilometers southwest of the port town of Eureka. A magnitude 6.4 earthquake occurred on the morning of Tuesday,...