This Swedish retiree left on July 1 and arrived for the opening of the COP ten days ago in Egypt. A journey intended to show that changing the way you move is possible, even for a long trip, and even at 72 years old. 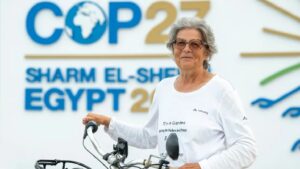 How to use COP27 to send a concrete message? Dorothee Hildegrandt, a 72-year-old Swede opted for a very concrete solution: she joined the climate conference being held in Sharm el-Sheikh, Egypt, by bicycle from Stockholm, Sweden. That’s more than 8,200 kilometers on an electric bike and a journey of four months and five days. She left on July 1 and arrived just before the opening of the COP. The idea came to him a year ago, just after the previous climate conference in Scotland. An event from which she emerged disappointed, disappointed to see heads of state, business leaders and lobbyists get off their private jets and then leave immediately for absolutely no progress.

Retired for ten years, she has worked all her life as a housekeeper and then a home helper, and the lack of political will in the face of global warming has been worrying her for several years. Dorothee Hildegrandt is afraid for the future of her two grandchildren. So to act, she co-founded her version of “Fridays for future”: “Grandmas for future”, grandmothers for the future. She demonstrated, petitioned, and then she told herself that nothing beats leading by example. So she drew up a route, and took her bike to Sharm el-Sheikh in Egypt.

Not adventurous but realistic, she preferred to leave four months before the start of COP27 to ride without hurry, to show that you can travel the world, move around, travel differently, even at 72 years old. She therefore crossed 17 countries, at an average speed of 80 kilometers per day, sleeping with locals or in hostels. She saw her bike break down with brakes, batteries, inner tubes, but she also says that she met great people, in Turkey for example with strangers who repaired everything for free, others in Syria who helped him cross a dangerous area into Lebanon by taxi.

“Of course, it wasn’t always comfortable, she says, but it’s like warming up, even if the idea of ​​changing our lifestyles seems uncomfortable, we can do it, and we must do it, it’s just a matter of will.” Moreover, to prove it to the end, Dorothee Hildegrandt will make the return trip by bike. A bicycle on which she hung a small sign: “I pedal for the future and for peace”.

Today News Post - November 11, 2022 0
The Head of State visited a military building in the harbor of Toulon on Wednesday to define France's military strategy. French President Emmanuel Macron during...