The country has been plunged into a serious institutional and political crisis for a month. These new deaths bring to 39 the number of people who died during the anti-government protests. 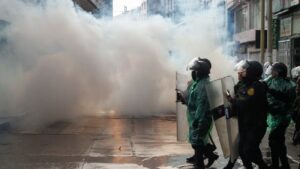 Renewed tensions in Peru. At least 17 people died in the south of the country on Monday, January 10, during clashes between the police and demonstrators against the new president Dina Boluarte. In its report, the People’s Defender (local mediator) also mentions more than thirty wounded. The victims have gunshot wounds.

The violence broke out “in the vicinity of Juliaca airport”, in the Aymara (Amerindian people) region of Puno, located about 1,300 km south of Lima. This airport had already been the subject of an attempted assault on Saturday. “Today more than 9,000 people approached Juliaca airport and approximately 2,000 of them launched a merciless attack on the police and the facilities, using improvised weapons,” the police told press the president of the Peruvian Council of Ministers Alberto Otarola, evoking an “extreme situation”.

“Gentlemen the police fired on us, told AFP a demonstrator. We ask Mrs. Dina that she resign. Accept the fact that the people do not love you!”. “What is taking place is a massacre between Peruvians, I ask for calm, do not expose yourselves”, exclaimed the mayor of Juliaca, Oscar Caceres, in an appeal to the population on the local radio La Decana.

These new deaths bring to 39 the number of people who died during anti-government demonstrations in almost a month of protests in Peru, a country plunged into a serious institutional and political crisis. At least twenty people had already been killed in mid-December during clashes with the police.

The demonstrators demand the resignation of Dina Boluarte, who arrived at the head of the country after the dismissal in December of the socialist Pedro Castillo. They also demand a new Parliament and the immediate holding of elections, already brought forward from 2026 to April 2024.