The new head of the military junta has made it known that he will respect the commitments already made for a rapid return of civilians to power. 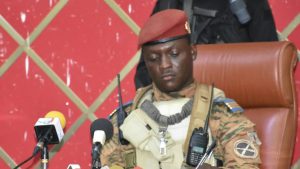 Captain Ibrahim Traoré, author of the last coup in Burkina Faso, officially became president of Burkina Faso on Wednesday, October 5, pending the appointment of a transitional president by “National Assizes”.“The President of the Patriotic Movement for Safeguarding and Restoration (MPSR) assumes the functions of Head of State, Supreme Head of the National Armed Forces”, indicates a declaration entitled “Fundamental Act” which completes the Constitution of Burkina, “in pending the adoption of a transition charter”.

The Act adopted on Wednesday specifies that while “awaiting the establishment of the transitional bodies”, the MPSR “is the guarantor of national independence, territorial integrity, permanence and continuity of the State, respect for international treaties and agreements to which Burkina Faso is a party”. The Constitution, which had been suspended on Friday, has been reinstated and “applies except for its contrary provisions” to the Fundamental Act.

The youngest head of state in the world

Ibrahim Traoré, 34, becomes the youngest head of state in the world, ahead of Chilean Gabriel Boric, 36. He partly justified his coup by blaming Lieutenant-Colonel Damiba for “the continued deterioration of the security situation”. He promised to do “within three months” what “should have been done in the past eight months”, a direct criticism of his predecessor.

A native of Bondokuy (west), the new leader of the Burkinabe junta studied geology in Ouagadougou, the country’s capital, before joining the army in 2010. He graduated from the Georges Namonao Military Academy, a training school of officers less glorious than the Prytanee militaire de Kadiogo (PMK) from which its predecessor came. He will come out vice-major of the promotion named “Citizenship”, says a former student who studied with him. Ten years of career at the front followed: he was deployed in the north and center of the country hit by jihadist attacks, then in Mali in 2018 within the United Nations mission, Minusma. He was named captain in 2020.

Ironically, Traoré’s recent career followed in the footsteps of that of Lieutenant-Colonel Damiba, whom he ended up overthrowing. He was a member of the coup junta, the Patriotic Movement for Safeguarding and Restoration (MPSR), which brought Damiba to power on January 24. A few weeks later, in March, President Damiba had appointed him artillery chief of the Kaya regiment, from which came the discontent.

Return of civilians to power

Appointed by his comrade spokespersons for MPSR members in the field, he was sent several times to Ouagadougou to plead for a change of strategy with President Damiba. It was ultimately because he was not heard, say several of his supporters, that he marched on Ouagadougou on Friday, a few days after yet another attack, this time against a supply convoy escorted by the army in the north, in Gaskinde. Official report: 27 military dead and 10 civilians killed.

Regular attacks by armed groups affiliated with Al-Qaeda and the Islamic State (IS) group have killed thousands and displaced some two million people. A majority of the territory escapes the control of the State, in particular on the side of the borders with Mali and Niger. Traore will have the daunting task of regaining the upper hand in the fight against jihadist groups, some affiliated with Al-Qaeda others with the Islamic State, which have continued to gain ground since they began their attacks in ” country of upright men” in 2015.

Ibrahim Traore received on October 4, 2022 a delegation from the Community of West African States (ECOWAS), who came to assess the situation a few days after the putsch. She left “confident”, according to former Nigerien President Mahamadou Issoufou, member of the delegation and ECOWAS mediator for Burkina. At the end of this meeting, Captain Traoré assured that Ouagadougou would continue to respect the commitments made by his predecessor to ECOWAS, in particular the organization of elections and a return of civilians to power no later than July 2024.

Today News Post - November 22, 2022 0
Not in the best of moods when entering the World Cup on Tuesday against Australia, the France team has many areas to work on...