The capture of Soledar by the Russians, this Friday, denied by the Ukrainian forces, is of essential importance for Moscow. Soledar, a small town in eastern Ukraine, is home to a salt mine whose galleries are coveted by the Russians to protect their soldiers from Ukrainian strikes. 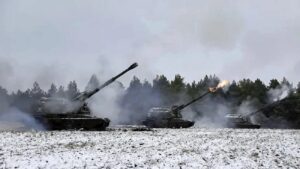 Russian army tanks in action this Friday, January 13 in the Donetsk region. (MAXPPP)

Communication battle over the control of Soledar in Ukraine. Russia claimed on Friday, January 13, to have taken control of this city in eastern Ukraine “which is of great importance for the continuation of offensive operations” in the eyes of the Russian authorities. An announcement quickly denied by kyiv, which claims that “violent fighting” was still in progress. Taking Soledar would be a big one for Moscow.

Soledar is, today, a city almost destroyed. Before the war, it had about 10,000 inhabitants. Russians communicate a lot around this city. Mercenaries from the Russian Wagner group, for example, have posted images on social media where men can be seen walking around the city center. A counter-attack was certainly carried out by the Ukrainians on Thursday evening, but the kyiv forces were apparently stopped outside the city.

Long months without victory for the Russians

If this conquest were to be confirmed, it would allow troops from Moscow to control an area just 11 kilometers north of Bakhmut, the main objective of the Wagner group and Russia in the region. The capture of Soledar could allow Moscow to prevent the supply of Bakhmut thanks to the control of the main road.

This conquest of Soledar, obviously at the price of very heavy losses, would above all be a symbolic victory for the army of Moscow. We are talking here about the first military victory of Russian troops since the spring. This summer and in the fall, the Russians have multiplied the setbacks. They thus evacuated the entire north-eastern region of Ukraine in September, then the city of Kherson in November, in southern Ukraine. The Russian forces had until then been on the defensive.

The salt mine as a camp near the front

In the longer term, Soledar can also become an important asset at the operational level, as the military say, thanks to its deep salt mines from which the city takes its name. These tunnels forming “a barracks place” where the Russians would be safe from Ukrainian strikes. The galleries run for nearly 200 kilometers and they are perfectly habitable. It is 15 degrees permanently all year round, whereas at the moment the outside temperature in the Donbass is rather around -15 degrees. These mines were a tourist attraction before the war. The galleries are often up to 30 meters high. They are large enough to house a church, a hotel and even a football stadium.

This mine could become a living space for several hundred men in the immediate vicinity of a front line. This is a non-negligible asset for any fighting army, avoiding in the case of the Russians catastrophes comparable to the recent bombardment of the school in Kafka where several hundred soldiers were quartered. This bombing killed at least 89 officially but could be much more important.

United States: confidential documents dating back to the vice-presidency of Joe Biden found in Washington