This measure authorizes the army to intervene to maintain order and entails the suspension of several constitutional rights. 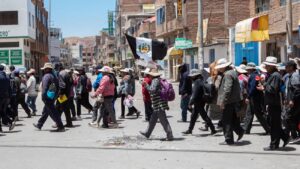 Hundreds of protesters in the streets of Juliaca, Peru, on January 14, 2023. (ANADOLU AGENCY)

The Peruvian government decreed a state of emergency in the capital Lima and several other regions on Saturday January 14. A decision motivated by the demonstrations against President Dina Boluarte which have left at least 42 dead in the country for five weeks.

This measure will be in effect for 30 days. It authorizes the army to intervene to maintain order and leads to the suspension of several constitutional rights such as freedom of movement and assembly and the inviolability of the home, according to a decree published Saturday evening in the official journal. In addition to the capital, the departments of Cusco and Puno are notably subject to a state of emergency, as is the port of Callao, near Lima.

More than a hundred roadblocks blocked traffic on Saturday across Peru, mainly in the south, the epicenter of the protest, but also around Lima. The authorities however reopened the same day the international airport of Cusco, of vital importance for the Peruvian tourist sector.

The protests erupted after the dismissal and arrest on December 7 of Socialist President Pedro Castillo, accused of having attempted to perpetrate a coup by wanting to dissolve the Parliament which was preparing to oust him from power.

Dina Boluarte, who was Pedro Castillo’s vice-president, succeeded him in accordance with the Constitution and came from the same left-wing party as him. But the demonstrators, who see her as a “traitor”, demand her departure as well as immediate elections. For the moment, the latter refuses to resign.

Today News Post - December 2, 2022 0
The security officer at the Ukrainian embassy in Madrid was slightly injured when a letter bomb intended for the ambassador exploded on Wednesday. The...