Protests have multiplied across the country in recent days to demand the release of the former head of state, Pedro Castillo, after his failed coup. 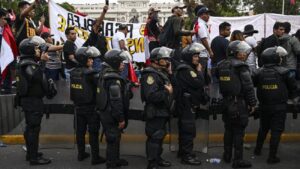 A demonstration in support of former President Pedro Castillo, in Lima (Peru), on December 11, 2022. (AFP)

Two people died and at least five people were injured on Sunday (December 11th) during growing protests against the President of Peru, Dina Boluarte, after the failed coup and the arrest of former President Pedro Castillo.

“We regret the death of two people and several injured in clashes. I urge the population to remain calm,” Interior Minister Cesar Cervantes told RPP radio. “The life of no Peruvian deserves to be sacrificed for political interests. I reiterate my call for dialogue and the renunciation of violence”, also launched the president on Twitter.

Protests have multiplied across the country in recent days, particularly in cities in the north and the Andes, to demand the release of the former head of state and new elections, also calling for a national strike. In Lima, the capital, between 1,000 and 2,000 people demonstrated in front of Congress on Sunday, shouting “Castillo you are not alone, the people support you” and waving signs accusing “Dina and the Congress” of being “corrupt rats”. They were dispersed with tear gas in the early evening.

Riot police reinforcements were to be flown in to contain the protests, police were told. On Friday, the new president had not ruled out calling early elections in order to find a peaceful way out of the political crisis.