The invasion of Ukraine by Russia and its implications for the gas supply of European countries has pushed the States of the Old Continent to seek savings. In Italy, the method of cooking pasta could be a way of sobriety. 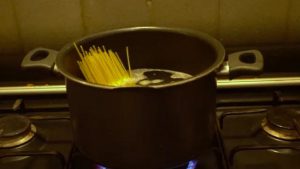 In the context of the meteoric rise in energy prices throughout Europe, all the tips for saving are good. At the heart of discussions in Italy, the “passive” cooking of pasta.It consists of turning off the heat or the plates after two minutes and leaving the lid on to keep the heat in. The pasta would have the same texture and flavor. The first to have proposed it was Giorgio Parisi, Italian Nobel Prize in Physics. Barilla, the world’s largest pasta maker, has taken this idea by inventing a gadget to put on the lid to warn when the temperature is ideal.

No difference in taste or texture

The passive version is nothing new, it’s an old recipe that divides Italians. “I haven’t tried, but I don’t want to hear about it,” says a Transalpine. For chef Nicola Marchesani, who has experienced both cooking methods, there is no difference between these two techniques. “It’s logical, it’s chemistry, the cooks know it,” he says. According to some studies, this cooking method could save up to 47% energy. With an average consumption of 23 kilos of pasta per year and per inhabitant, this small gesture could make a difference.

Today News Post - November 9, 2022 0
This central African country, the continent's largest economy and most populous country, has been hit by historic floods that hardly anyone talks about. A man...