A traffic of glass eels, the fishing of which is highly regulated, has been dismantled in the south-west of France. The price per kilo of this species, very rare, is negotiated up to 900 euros. 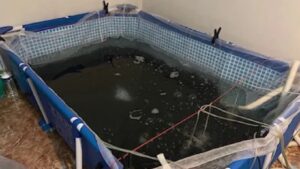 28 kilos of glass eels were seized by customs officers. The glass eel is the fry of the eel, a vulnerable species. Its fishing is supervised, and its export prohibited outside Europe. Customs officers seize them regularly on the highway between Bayonne (Pyrenees-Atlantiques) and Paris. This dish, very popular in Asia, is nicknamed “white gold”.

100 tons exported illegally each year according to Europol

“We are on resale values, in Asia, at 5,000 euros per kilo”, estimates Michael Faucher, customs division chief of Bordeaux (Gironde). The investigation, still in progress, reveals that the two drivers were delivering to a storage point in the Paris region. 150 kg of glass eels were seized in basins, before their probable shipment to Asia. Europol estimates that 100 tons would be illegally exported each year, for a value of 500 million euros.