The XV of France, undefeated for eleven games, faces South Africa on Saturday in Marseille. A stylish opposition and a huge shock less than a year from the start of the World Cup. 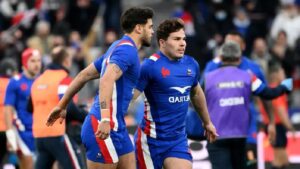 Antoine Dupont and Romain Ntamack, here against Ireland at the Stade de France on February 12, will be keen to shine against South Africa. / AFP)

A big leap into the unknown against an opponent whose game is known to all. This is the paradox that awaits the XV of France, Saturday, November 12, in Marseille (9 p.m. live on France 2 and on france.tv), against South Africa in the framework of the Autumn Nations Cup . “It’s a team profile that we haven’t played yet,” noted Laurent Labit, assistant to Fabien Galthié, this week at a press conference in Marcoussis. Understand, through the words of the coach of the blue backs, an ultra-powerful, almost monolithic team, which makes its money by crushing the opponent. That of the Blues, fresh for 11 games, will he be beaten? Elements of response through the stakes of this match.

The series are made to end one day, but the later is always the best. After coming close to defeat last week against Australia (30-29), Fabien Galthie’s men finally pushed the cursor of consecutive victories to eleven. And, precisely eleven months before the start of the World Cup, there are certainly big psychological points to be scored in the event of success against an opponent who is vying with the French and the Blacks for the honorary, but symbolic, first place in the IRB classification. France, 2nd nation in the world, faces South Africa, 4th, which it has not beaten since 2009 (seven defeats in a row), but which it has not played since 2018. The Blues, whose Starting XV has been renewed in its entirety, would be well advised to win with a view to a future confrontation in the World Cup, the two teams could very well find themselves there in the quarter-finals …

The image is quite simplistic but the South Africans do not do much to remove this label of “nags” that we generally affix to them. Followers of a rather restrictive game, the reigning world champions win most of the time without making people dream. But they win.

However, this was not the case last week in Dublin where they were caught in their own game by Irish experts in close combat (19-16). Surprisingly blunted in the phases where they are traditionally dominating (conquest, physical challenge, rucks), the Springboks could redouble their intensity against the Blues. Coach Jacques Nienaber has also announced the color in his composition by establishing Faf de Klerk and Willie Le Roux, two specialists in the occupation game on foot. The Velodrome may not need to turn on its floodlights on Saturday evening, as the South African candles are likely to illuminate the lawn…

Put oil in the hinge

Rightly praised for months, the Antoine Dupont-Romain Ntamack pair suffered as rarely last Saturday against the Wallabies. Imprecise in their transmissions, the scrum-half and the opener were chased by Australians who had decided to look for them very high in order to deprive them of time. It worked but it takes more to move Laurent Labit. “We knew we would have connection and binder problems,” he tempers. “Antoine and Romain had not played together for seven weeks. Our team had not met for seven months. These mistakes were not surprising. I am sure that the hinge will be better on Saturday evening”. To slide and open the door to a 12th victory?

Today News Post - October 9, 2022 0
Austria holds a presidential election on Sunday that is expected to be won by incumbent Alexander Van der Bellen, seen as a beacon of...