New Year’s greetings can be a difficult exercise. In Germany, the Minister of Defense missed them so much… that some are calling for her resignation. 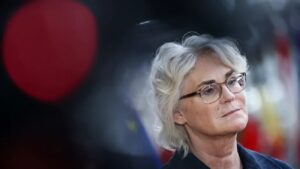 The video is only one minute long. But quite a painful minute to watch. German Defense Minister Christine Lambrecht is filmed on the phone, at night in Berlin, standing under the orange light of street lights. The image is very badly framed: you can’t see her legs, she has too much sky above her head – but at this stage, it’s a detail. The minister is constantly disheveled by gusts of wind and her very poor quality microphone: her words are inaudible.

The only thing we hear distinctly are the anarchic firing of firecrackers and New Year’s fireworks: the Germans have been particularly let loose this year – after two years of deprivation due to Covid. There were even dozens of injuries, one death near Leipzig. Under the explosions, the minister remains imperturbable.

“The opportunity for many experiences”

What’s even more out of place is that Christine Lambrecht speaks of the war in Ukraine as an… exciting professional experience. She says “It was for me the occasion of many experiences… and I was able to meet a lot of interesting and wonderful people. For that, I say a big thank you”. At the same time in Ukraine, we heard the same kind of shots… but Russian missile shots.

This “disastrous” intervention “would already have been embarrassing for a volunteer village mayor”, writes the daily Bild. “For a defense minister of a NATO member country”, “she puts all of Germany to shame”. “But no one will blame him. Quite simply because no one takes our Minister of Defense seriously anymore.”

This episode crowns a difficult year 2022 for Christine Lambrecht (member of the SPD, the social democratic party). In office since the end of 2021, she accumulates mockery and criticism, including in her own camp: “Doubts about her suitability for this position have existed for a long time”, says the Tagesspiegel. It is time for the Chancellor to draw the consequences.”

During his Monday press briefing, the ministry spokesperson simply explained that it was a “private video” on an Instagram account, made “without official resources”. It did not calm the bronca. “If Chancellor Scholz does not intervene and change his worst minister, she will make the federal government and all of Germany a laughing stock,” adds Bild.

What are we accusing him of? First, far too timid support for Ukraine. At the end of January, it is pleased to send 5,000 helmets to kyiv as the country which is preparing for the Russian invasion asks for heavy weapons. Passivity and inaction also internally. While Germany has just taken a historic turn in defense with an exceptional fund of 100 billion euros for its army, in December, it had still not succeeded in replenishing the Bundeswher’s ammunition stocks.

Even the members of the party say it in veiled terms: Lambrecht is in reality interested neither in the German army nor in the war. There is no trace of rapid reforms, investments, modernization. During her first interview after taking office, she said in an interview that she did not know the ranks of the Bundeswehr. Five months later, at the Frankfurter Allgemeine Sonntagszeitung, she confirmed… that she still didn’t know them.

Ms. Lambrecht also embodies, in the eyes of the Germans, the shortcomings of an army whose equipment is outdated. In mid-December, Berlin had to suspend new orders for Puma tanks after a series of breakdowns affecting tanks already in use by the army. For the Süddeutsche Zeitung, the minister’s repeated errors “constitute a huge mortgage” for an army supposed to modernize and regain strategic importance in times of war.

His son in the ministry helicopter

Not to mention her personal setbacks, such as in April when she loaded her 21-year-old son into her army Cougar helicopter, first for a trip to a military site and then to spend the Easter weekend on the island of Sylt, in Schleswig-Holstein. It is he who fans the case by posting a photo on Instagram.

And even if the minister claims to have settled the bill (this type of theft is estimated at 5000 euros per hour by the media), the controversy weakens her. Calls for resignation are already being heard on this occasion.

In the family, we are really not good with social networks! It could end up costing Christine Lambrecht her job. She would not be the first: the Environmental Minister for the Family, who went on vacation to France after the floods last summer in North Rhine-Westphalia, also had to leave her post.

But will Olaf Scholz bring himself to let go of a minister he chose himself? “She will be a very, very important Minister of Defense for the Federal Republic of Germany,” he promised when he was appointed. The Chancellor is not in the habit of letting his staff down at the first storm.

Today News Post - December 2, 2022 0
This estimate, coming from "external sources", included both the killed and the wounded, justified the institution after removing this passage. kyiv had reacted strongly...