Three migrants from Lagos (Nigeria) were rescued on Monday November 28 in the port of Las Palmas, in the Canary Islands. They spent eleven days hiding on the rudder of an oil tanker. 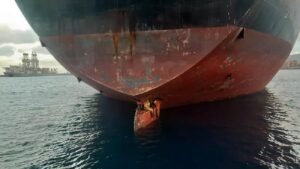 For eleven days, from Nigeria to the Canary Islands, these three stowaways hid near the rudder of the Alithini II tanker. (AFP)

They spent eleven days in the Atlantic clinging to the back of an oil tanker. And it is packed on the blade of the rudder that we found them Monday when the ship arrived at the port of Las Palmas on the island of Gran Canaria. Rescue services have released this incredible photo where three tiny figures are seen sitting on the piece of metal, their backs hunched under the huge hull of the ship which descends just above their heads. The boat, the Alithini II left on November 17 from Lagos, Nigeria.

The fact that they survived this crossing is a miracle. When the ship is very loaded or there is a swell, this part of the rudder is regularly found under water. And even if the tanker is moving very slowly, at about 8 knots (14 km/h), you have to hold on to not get carried away by a heavy sea. The three passengers, moreover, probably did not stay there for 11 days , they also took refuge inside the hull of the boat, climbing through the cavity that allows the rotation of the rudder.

A narrowly avoided return to the starting point

In any case, they arrived exhausted, dehydrated, in hypothermia. They were briefly hospitalized. Just two days after their arrival, the Spanish authorities wanted to send them back to their starting point.

This is what international law provides: illegal passengers on a declared boat, they do not have the same status as migrants who arrive on makeshift boats. If they do not apply for asylum, the shipowner must bring them back. But a showdown has begun with an NGO, Caminando Fronteras, which has denounced a hasty repatriation. The authorities had not communicated the name, age, nationality or journey of the three passengers who finally applied for asylum and remained in Gran Canaria. The Alithini II resumed its journey without them yesterday bound for Gibraltar.

The number of migrants arriving in the Canaries has risen sharply since late 2019 after checks on Mediterranean routes were tightened.

Spanish data shows migration by sea to the archipelago jumped 51% in the first five months of the year compared with a year earlier pic.twitter.com/cp7ecyZPeU

This is not the first time that migrants have traveled at the helm of a ship, although it remains extremely rare given the perilous side of such a journey. There was one case in 2018, two others in 2020, on ships which also came from Lagos to Las Palmas.

We can draw a parallel with those who travel in the landing gear of planes. Others probably died at sea without their story reaching us. In general, the road to the Canary Islands is increasingly taken by candidates for exile from Africa. According to the Spanish Interior Ministry, since the beginning of the year more than 11,600 people have reached the archipelago by sea.

Today News Post - December 11, 2022 0
The Moroccans took the advantage in the first period before holding on against the Lusitanians (1-0). For the first time in history, an African...