Volodymyr Zelensky announced the holding of a summit between Ukraine and the EU next month in kyiv, in order to discuss in particular European financial and military support. 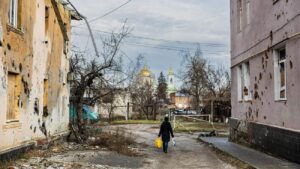 A resident of the city of Izium in the middle of damaged buildings, January 2, 2023. (AFP)

A summit between Ukraine and the European Union will take place in kyiv on February 3 to discuss European financial and military support, the office of President Volodymyr Zelensky announced on Tuesday January 3. In Russia, tributes are organized in memory of the soldiers killed in eastern Ukraine, after a strike claimed by kyiv.

Volodymyr Zelensky announced the holding of a summit between Ukraine and the European Union on February 3 in kyiv. The office of the Ukrainian president specifies in its press release that this meeting will aim to discuss financial and military support from Europe. Volodymyr Zelensky has already discussed the details of this high-level meeting with the President of the European Commission, Ursula von der Leyen.

The leaders together discussed the delivery of “appropriate” weapons and the launch of the new financial aid program for Ukraine of 18 billion euros, adopted in December by the European Parliament. The Ukrainian president insisted that a first contribution be paid to his country during the month. For now, the EU has confirmed the date of the summit but not the venue of the meeting.

Rallies were held today in Russia to pay tribute to servicemen killed in a strike claimed by kyiv near Donetsk in eastern Ukraine. This strike on Makiivka left at least 89 dead, according to a new report provided by Moscow, and several hundred according to kyiv.

Some 200 people took part in an authorized gathering in Samara, in the center of the country, where some of the soldiers killed were from. Some laid flowers in front of an eternal flame in one of the city’s main squares, before bowing respectfully, according to an AFP correspondent. According to local media, rallies were also taking place in other cities in the region, notably in Togliatti and Syzran.

Volodymyr Zelensky expects a prolonged Shahed drone attack on Ukraine. “Only two days have passed since the beginning of the year and the number of Iranian drones shot down over Ukraine is already over 80, explains the Ukrainian president in his last video message. This number could increase in a near future. Because these weeks the nights can be quite rough.”

The Ukrainian secret services also claim to have collected enough evidence against two senior Russian military officials, accused of being responsible for strikes against civilian infrastructure in Ukraine. Colonel General Sergei Kobylach and Admiral Igor Osipov are the first two people charged by kyiv for bombing civilian targets. This crime is punishable by life imprisonment.

Putin uses cinema for his propaganda

Russian President Vladimir Putin has ordered his government to organize by February the screening in cinemas of “documentary films” on the offensive of Moscow forces in Ukraine. “To the Ministry of Culture to submit proposals to ensure the screening of national documentary films in cinema networks on subjects related to the special military operation, the fight against the spread of neo-Nazi and neo-fascist ideology “, can we read in a message published on the Kremlin website.

Russia justifies its offensive in Ukraine in particular by a desire to “denazify” the country, the Kremlin accusing Ukrainian President Volodymyr Zelensky and the authorities in kyiv of collusion with ultra-nationalist circles. Moscow also presents its offensive as a conflict opposing it by proxy to the West, because of the crucial arms deliveries to kyiv.

At this stage, 3,400 Ukrainian soldiers and civilians are prisoners in Russia, according to an adviser to Volodymyr Zelensky quoted by the media Suspilne (article in Ukrainian). Alyona Verbytska adds that 15,000 Ukrainian citizens are missing. Since the start of the war, 1,596 Ukrainians have returned from captivity, including 187 women.

Today News Post - September 25, 2022 0
That says a lot about the backgrounds of the duchesses Kate Middleton has been the Duchess of Cambridge for almost a decade now. She married...