The inscriptions on these statues in Etruscan will help to better understand this very complex language. 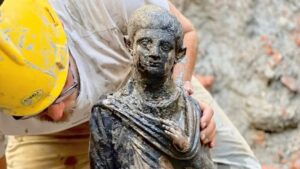 A bronze statue dating back to 2,000 BC discovered in the region of Siena, Italy, on November 8, 2022. (HANDOUT/ITALIAN CULTURE MINISTRY via AFP)

Italian archaeologists announced this week the exceptional discovery of twenty ancient bronze statues in Tuscany. They are over 2000 years old. The oldest of these bronzes were probably cast around 200 BC: they represent healing deities as well as worshipers making offerings. These statues (remarkably preserved) were discovered in the province of Siena, in an ancient sanctuary dedicated to health. A kind of thermal establishment established during the Etruscan period, and later developed by the Romans. Archaeologists also discovered 5,000 coins on site. “This is undoubtedly one of the most remarkable discoveries in the history of the ancient Mediterranean” assures the Italian Ministry of Culture, which is already planning to create an archaeological park on site.

The exceptional conservation of these statues and coins is explained because they were found in thermal waters: hot, muddy waters, and rich in sulfur and this chemical composition which contributed to the conservation to the point that we can even read on certain objects inscriptions in Etruscan and Latin as well as the name of powerful family of the time. Moreover, these statues have survived the ravages of time because they were voluntarily protected when this pagan sanctuary disappeared: they were found hidden by tiles and columns in the thermal pools. This allowed them not to be found earlier, and not to have been recast into coins or other bronze objects, in the centuries that followed.

This discovery confirms a kind of continuity between the Etruscan period and the Roman period over the two centuries before and after Jesus Christ, explains Marie-Laurence Haack, professor of ancient history at the University of Picardy, specialist in Etruscans and author of the book Discovering the Etruscans published by La Découverte. There was a form of continuity in the rites and this thermal sanctuary illustrates it.

In addition, the inscriptions in Etruscan, will make it possible to better know this language which is written with the Greek alphabet, but which remains rather mysterious. Around sixty researchers and historians have already been called upon in Italy to analyze this discovery.

Today News Post - November 11, 2022 0
At the heart of the standoff between France and Italy, there is the reception of migrants who have crossed the Mediterranean but also their...