Exhibition on world tour at La Villette in Paris from April 7, “Ramses and the gold of the Pharaohs” will be enriched by the exclusive loan by Egypt of the coffin of Ramses II. A first in France for forty-five years. 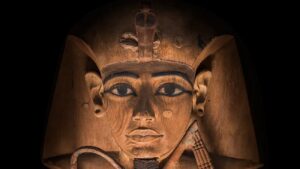 It promises to be a flagship exhibition for the first half of 2023 in Paris: it will be doubly so thanks to the loan of the coffin of Ramses II, known as Ramses The Great, by the Egyptian authorities. From April 7, 2023 at the Grande Halle de la Villette in Paris, the exhibition “Ramses and the gold of the Pharaohs” will float a perfume of ancient Egypt above Paris.

This exclusive loan, a first for 45 years, is a gesture of friendship from Egypt towards France. Cairo does not forget that Paris had collected the mummy of Ramses II in 1976, seriously damaged by fungi which gnawed at it. The pharaoh’s coffin was then received with all the honors due to a head of state. Ramses had been taken to the Musee de l’Homme to be “treated”. Teams of French scientists had managed to save it, thus preserving this priceless treasure for the Egyptians. His coffin was exhibited at the Grand Palais, during the “Ramses the Great” exhibition.

A rich exhibition of 180 treasures

This coffin will be the highlight of this exhibition, which recounts the discovery in 1881 of the mummy of Ramses the Great, the pharaoh whose name enabled Champollion to unravel the mystery of hieroglyphics. It will present visitors to La Villette with some 180 treasures, animal mummies, statues, sarcophagi, royal masks, jewelry and gold and silver amulets, until September 6, 2023.

Visitors will stroll among priceless relics of the great pharaoh and will also be able to immerse themselves in the atmosphere of the time thanks to a virtual reality experience. The tour will begin with a film showing spectacular panoramic views and explore in detail the life of Ramses and end with the famous rediscovery in 1881 of a hiding place in the Theban Necropolis, in which the coffin of Ramses II lay in the company of other royal mummies.

The exhibition has been touring 10 cities around the world since 2021. It was designed in partnership with the Supreme Council of Antiquities of the Arab Republic of Egypt and jointly produced by Cityneon and World Heritage Exhibitions. “Our partners at World Heritage Exhibitions fully understood our vision to highlight the tremendous impact of Ramses on the historical development of Egypt. This spectacular exhibition will feature 181 rare Egyptian artifacts, the most impressive collection illustrating the grandeur of royalty pharaonic,” says Ron Tan, executive chairman and CEO of Cityneon Holdings, whose team of experts helped design the exhibit.

It was not until 1881 that Ramses II was rediscovered, along with other royal mummies sheltered by the priests of ancient Egypt. A discovery that had upset the world, when in the middle of the 19th century, the tomb of Ramses was looted by thieves. Specialists then thought that its treasures were lost forever.

Figure skating: Kamila Valieva not sanctioned by the Russian anti-doping agency, WADA says it is “concerned”

Ukraine: NGO Human Rights Watch welcomes “an unprecedented international reaction” to the war, but regrets “a lack of attention” to other conflicts