Gerald Darmanin announced Thursday, November 10, at the exit of the Council of Ministers that the humanitarian ship would land in Toulon the next day. The Minister of the Interior strongly criticized the decisions of the Italian government. 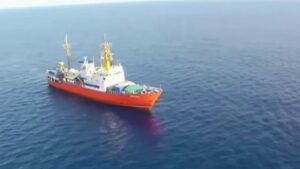 The dramatic humanitarian situation has lasted for more than 15 days in the middle of the Mediterranean. Currently off Corsica, the ship Ocean Viking has 230 surviving migrants on board, including 57 children. He must dock urgently, but does not know if he should head for France or Italy. At the end of the Council of Ministers Thursday, November 10, Gerald Darmanin announced that he would land Friday, November 11 in Toulon.

A diplomatic conflict with Italy

“Faced with this situation, the French authorities have taken the exceptional decision to compensate for the unacceptable behavior of the Italian government and to call the ship to join the military port of Toulon,” said the Minister of the Interior. The diplomatic battle is therefore raging between Paris and Rome. In detail, a third of the 230 migrants on board will be taken care of in France, another third of the most fragile have already been welcomed by Italy. A third third was to be sent to other European countries.