Russia agreed on Thursday to exchange the American prisoner for this Russian citizen detained in the United States since 2011. 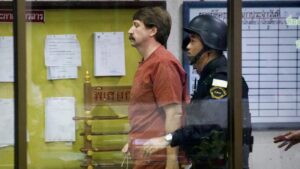 A basketball star against an arms dealer. The American Brittney Griner, professional player of the Yekaterinburg basketball club (Russia) was released on Thursday December 8 as part of a prisoner exchange with Viktor Bout, 55, a Russian trafficker imprisoned for eleven years in the United States . A relief for the sportswoman’s family, but a loss for American justice, which considered Viktor Bout to be one of the most dangerous arms traffickers in the world.

A native of Dushanbe, the capital of present-day Tajikistan, Viktor Bout studied at the Military Institute of Foreign Languages in Moscow, an institution which notably trains agents of the military intelligence services of the former USSR, underlines RFI. The man speaks six languages, recalled in 2010 the Guardian (in English). Translator and radio operator for the Soviet Air Force, he carried out numerous missions abroad at the end of the 1980s. He is suspected of having been a member of the military intelligence services.

In 1991, Viktor Bout took advantage of the fall of the Soviet Union to leave the army and embark on new lucrative activities. According to his accusers, he uses the chaos reigning in the former USSR to buy weapons at low prices on disorganized military bases and from officers hungry for easy money. A stroke of genius, he built his own fleet of planes to deliver his cargoes.

Viktor Bout is accused of having developed a network of arms sales to, in particular, African countries under international embargo, such as Angola, Liberia, Rwanda or the Democratic Republic of Congo. “Viktor Bout was ready to sell an arsenal of weapons to make certain small countries envious”, declared the American prosecutor Preet Bharara, quoted by the New York Times during the trial of Bout in 2011.

Drawing from the arms stocks of former Soviet republics, he sells rifles, explosives and military vehicles to the highest bidders armed groups, earning his nickname “merchant of death”. Its planes supply the Afghan Taliban with weapons, allow Mobutu Sese Seko, “King of Zaire”, to flee the civil war, but also transport humanitarian aid for the United Nations, recalls Le Monde.

American journalist Douglas Farah, co-author in 2008 of the investigative book Merchant of Death, describes Viktor Bout as “a Soviet officer who seized the opportunity presented by three factors born of the collapse of the Soviet Union: abandoned planes on runways between Moscow and kyiv…, huge stockpiles of weapons guarded by unpaid soldiers, and the explosion in demand for weapons.” The scenario of the American film Lord of War, released in 2005 and in which Nicolas Cage plays a trafficker hunted down by Interpol, is freely inspired by his life.

2. He was serving a 25-year prison sentence in the United States.

After years of tracking by Western intelligence services, and under an international arrest warrant, Viktor Bout was arrested in Thailand in 2008, during an operation by the DEA, the American anti-drug agency. , which traps him. He has so far managed to evade police around the world thanks to numerous fake passports, friends in high places in the Russian administration, as well as his huge fleet of cargo planes. According to the prosecution, he agreed to sell an arsenal of rifles and missiles to these American agents, who posed as guerrillas of the Revolutionary Armed Forces of Colombia wishing to shoot down American helicopters that were helping the Colombian army.

Viktor Bout was extradited in 2010 from Thailand in a jet specially chartered by the United States. Convicted of arms trafficking in 2011, he was sentenced the following year in New York to 25 years in prison. “I’m not guilty, I never intended to kill anyone, I never intended to sell weapons to anyone, God knows the truth”, lance- he before the verdict was announced.

His wife, Alla Bout, describes him as an “honest businessman and a great patriot, condemned for crimes he did not commit”, in the preface to the book by Russian journalist Alexandre Gassiouk, published in 2021 and who intends to tell “the real story” of the “Merchant of Death”. “The myth created about Bout by the United States is indecently primitive: a Russian bad guy was illegally selling weapons and trying to harm America, but the good American guys put an end to it,” says the author.

3. An exchange of detainees envisaged since August

As soon as the sentence was pronounced in the United States, the Russian Ministry of Foreign Affairs, which describes the verdict as “political”, promises to do everything to obtain the return of Viktor Bout to Russia. Since then, Moscow has constantly castigated the incarceration of the arms dealer.

Last August, the United States officially formulated an exchange offer mentioning Viktor Bout, in order to free Brittney Griner, but also Paul Whelan, a 52-year-old former American soldier detained in a case of alleged espionage. On August 5, the day after Brittney Griner’s conviction, Russia said it was “ready” to discuss a prisoner swap with the United States. According to some experts, Viktor Bout may have military secrets and information about the former KGB (the Soviet secret services) that Moscow does not want to leak out, recalls Jeune Afrique (paid article).

If the exchange finally took place, the operation only concerned the basketball player, to the chagrin of the family of Paul Whelan, in a Russian penal colony for four years. “Even if we failed to secure Paul’s release, we will never give up,” US President Joe Biden said on Thursday.

Today News Post - December 19, 2022 0
The 20 Hours presents a day of news in the world, Sunday, December 18. In Iran, actress Taraneh Allidousti has been arrested by the...