The 20 Hours presents a day of news in the world, Sunday, December 18. In Iran, actress Taraneh Allidousti has been arrested by the authorities and the Covid epidemic is resuming in China. 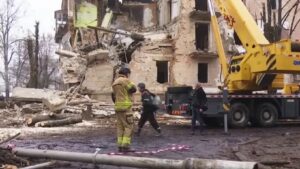 Overdue packages everywhere in Beijing, China, Monday, December 19, a symbol of the resumption of the Covid-19 epidemic. The number of cases explodes, sick, the deliverers can no longer deliver these packages. The test gymnasiums are replaced there by drug distribution points. In pharmacies, the shelves are empty and the queues endless.

From the Cannes Film Festival red carpet to an Iranian prison, only a few months have passed for actress Taraneh Allidousti. She was arrested in Tehran after having publicly supported the protest movement that is shaking the country, without a veil, on social networks.
Civilians are still at the heart of the war in Ukraine. An apartment building in Kryvyi Rih, in the center of the country, was hit by a Russian missile. The police forces film the rescue, with shocking images where we discover children stunned, but safe. Four people were killed there, 13 others were injured, including four children.