“We are only thinking about it,” said Vladimir Putin, however. 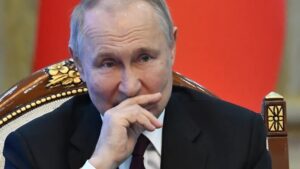 A new Russian strategy? Russia could modify its military doctrine by introducing the possibility of a preventive strike to disarm an enemy, Russian President Vladimir Putin said on Friday (December 9th). He was responding to a question from a journalist during a visit to Bishkek, the capital of Kyrgyzstan, who asked him to clarify his statement earlier this week on the use of nuclear weapons.

Speaking to the press days after warning that the risk of nuclear war was growing but that Russia would not strike first, Vladimir Putin said Moscow was considering adopting what he called Washington’s concept of a preemptive strike.

“We’re just thinking about it”

“First, the United States has developed the concept of a preemptive strike. Second, they are developing a strike system aimed at disarming” (the enemy), President Putin told reporters following his visit to Kyrgyzstan . He added that Moscow should perhaps think about adopting the “ideas developed by the Americans to ensure their own security”. “We’re just thinking about it,” he said, however.

The specter of a possible nuclear war returned to the forefront of the international scene after the invasion of Ukraine in February, underscoring the erosion of the global security architecture dating from the Cold War. Russian military setbacks in recent months have raised fears that Moscow is planning to reverse the trend by resorting to its nuclear arsenal.

Today News Post - January 17, 2023 0
The goal of merchants with this initiative, which was started approximately two months ago, is to cut the cost of essentials. Savings are welcomed...