The leaders of the G7, meeting in a virtual summit on Monday, decided to set up a “platform” responsible for “coordinating financial aid” to Ukraine. 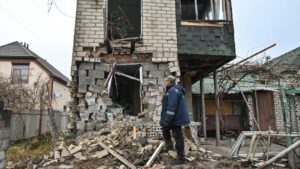 A man in front of a house destroyed by Russian strikes, in Kherson, Ukraine, on December 12, 2022. (AFP)

A virtual summit on Monday, before a summit in Paris on Tuesday. As Russian forces target basic public service infrastructure in Ukraine, causing, among other things, power cuts affecting millions of people in the middle of winter, discussions on aid to Kiev have continued, Monday, December 12. During their virtual summit, the G7 leaders agreed on the establishment of a “platform” responsible for “coordinating financial assistance” to Ukraine, on the eve of a conference on the same subject in Paris, around French President Emmanuel Macron.

A G7 meeting devoted to aid to Ukraine

Gathered in a virtual summit, the leaders of the G7 (United States, Germany, Canada, France, Great Britain, Japan and Italy) have decided to set up a “platform” responsible for “coordinating financial assistance” to Ukraine. “The objective is to quickly build this platform with the participation of Ukraine, international financial institutions and other partners”, German Chancellor Olaf Scholz explained at a press conference, comparing the reconstruction of Ukraine to the plan Marshall put in place by the United States to rebuild Europe after World War II.

Speaking via videoconference, Ukrainian President Volodymyr Zelensky meanwhile urged G7 countries to supply more arms and gas to Ukraine as people in his country are hit by the arrival winter, often with no power and no heating. “Ukraine needs modern tanks”, would like “artillery, guns and shells”, as well as “long-range missiles”, he listed, according to statements reported by the Ukrainian presidency .

In addition to weapons, the Ukrainian president has asked Westerners for more gas. According to kyiv, 40% of essential national facilities are now damaged as a result of Russian strikes. “We need additional support this winter. We are talking about a volume of around two billion cubic meters of gas that needs to be purchased additionally,” he said. Finally, he proposed to the G7 countries a “world peace summit” on Ukraine.

The French authorities are warning major administrations and organizations against possible shipments of parcel bombs such as those which recently targeted Ukrainian representations and Spanish political institutions. Between November 24 and December 1, six postal parcel bombs were sent to several private and state organizations established in Spain, in connection with the conflict between Ukraine and Russia, with, inside these parcels, incendiary or explosive substances such as assault rifle bullets. Faced with these malicious acts, the General Secretariat for Defense and National Security (SGDSN), dependent on the Prime Minister, sent a note to the ministries to warn them and indicate the steps to be taken if they or an organization of vital importance depending on their perimeter came to receive such packages

The spokesman for Ukrainian diplomacy announced that several Ukrainian diplomatic representations in Europe had received “bloody” envelopes containing animal eyes. kyiv then denounced a “planned campaign of terror” by Moscow.

At least two people were killed and five others injured in “massive” Russian bombardments on Kherson, a major city in southern Ukraine taken over by Kiev a month ago, said the regional governor. According to Yaroslav Yanushevich, Russian troops struck a neighborhood in the center-east of Kherson. “Currently there are two killed and five injured,” he wrote on Telegram. Ambulances were heading to another area, also affected by the shelling and where the number of victims was not immediately known, he added.

Vitaliï Buliouk, first vice-governor of the Ukrainian region of Kherson, in the south of Ukraine, was injured on Monday in the explosion of his car. “His condition is stable, [the injury is] of moderate severity,” Regional Health Minister Vadim Ilmiev told reporters, as quoted by the TASS news agency. “The driver of the car died instantly”, “a directional mine exploded, the car was charred”, he detailed, quoted by the Russian news agency Interfax.

The head of the Zaporizhia regional authority, installed by Moscow, Vladimir Rogov, for his part affirmed on Telegram that the explosion took place in Skadovsk, a coastal city along the Black Sea, 70 km south of Kherson and the Dnieper River, which marks the current front line.

Brigitte Macron received the Ukrainian First Lady, Olena Zelenska, at the Elysee Palace, on the eve of a double conference in Paris on emergency aid to be provided to Ukraine and the commitment of French companies in the reconstruction of the country. “They gave an update on Operation Cigogne which has allowed the reception of Ukrainian children suffering from cancer in France and on the 20,000 children attending school in France” since the start of the Russian intervention on February 24 Brigitte Macron’s entourage told AFP. The two first ladies will go on Tuesday to a school in the 3rd arrondissement of Paris which welcomes children from families who have fled the war, according to this source.

“They also discussed the foundation that Mrs. Zelenska launched” to collect humanitarian aid and allow the reconstruction of hospitals in eastern Ukraine, said this source.

Nestle will invest 40 million Swiss francs in a new factory

Nestle will invest 40 million Swiss francs (40.5 million euros) in a new production site in Ukraine, in Smolyhiv in the west of the country, despite the war, announced the Swiss giant of the agri-food. With its Torchyn factory, this new factory located in the Volyn region is to be integrated into a cluster that will become a center for Nestle culinary products, which will employ 1,500 people to supply the Ukrainian market and other European markets. , said the Swiss group in a press release.

Today News Post - December 22, 2022 0
The Biden administration intends to reshape its relations with African countries. The recent summit on Africa in Washington is supposed to have produced the...