Friday, October 21, the “Weekly Photo” section of the 20 Hours newscast goes to the rice fields of Bangladesh, but also to the heart of the Canadian forest and to a Scottish university. 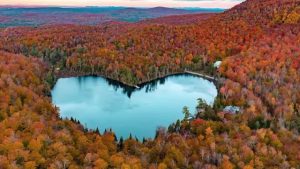 In an air show in the Alpine pastures, the Swiss army suspended eight soldiers from a helicopter. At 2,000 meters above sea level, the public could enjoy and hear the show. At the Guggenheim Museum in Bilbao (Spain), a sculpture impresses. The work of art is a huge steel spiral, in which visitors can slip. For their part, in Bangladesh, rice farmers create another work of art. They dry the unhulled rice in the sun on the asphalt.

A festive integration in Saint-Andrews

Once the harvest is over in Java (Indonesia), the rice field becomes a football stadium in the middle of which children play, covered in mud. In Scotland, students are also covered, but with shaving foam. They spread during an integration day at the University of Saint-Andrews. Finally, near Montreal (Canada), a heart-shaped lake, lost among orange trees, calls for a romantic stay. There are about thirty heart-shaped lakes in the world.

Today News Post - November 5, 2022 0
After the controversy surrounding Kanye West's anti-Semitic remarks, the American rapper is on the way to becoming the future boss of the social network...