Like every day, the todaynewspost evening news takes a tour of the news broadcast by European television channels. It’s Eurozapping on Monday, October 24. 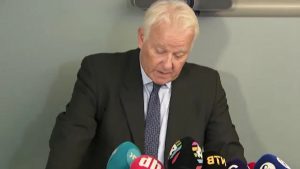 Emmanuel Macron met the pope in Rome for the third time and made the front page of Rai. They notably discussed the war in Ukraine and the end of life in France. In Norway, a man has been exonerated after more than twenty years in prison. Accused of the rape and murder of two children, he was cleared by DNA fingerprinting. The Norwegian public prosecutor has apologized.

Spanish museums are concerned about attacks by environmental activists. After a painting by Monet and another by Van Gogh have been covered in mashed potatoes and tomatoes in recent days, they want to avoid any similar action and “[take] account of these new circumstances”, explains Mabel Tapia, of the museum of Queen Sophia of Madrid.

Today News Post - November 16, 2022 0
Tuesday's strikes "were only carried out on the territory of Ukraine at a distance of more than 35 kilometers from the Ukrainian-Polish border", the...