Luiz Inacio Lula da Silva and Jair Bolsonaro qualified for the second round of the election, scheduled for Sunday October 30. This electoral period promises to be particularly tense as the country seems polarised. 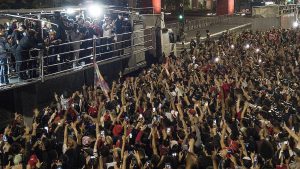 The inter-round should last four weeks. Brazil begins a second period of electoral campaign, Monday, October 3, the day after the first round of the presidential election which saw the former left-wing president Luiz Inacio Lula da Silva come out on top with 48.43% of the votes. . His far-right rival, outgoing head of state Jair Bolsonaro, qualified with 43.20%, according to almost final results (in Portuguese). A much tighter gap than expected.

“It’s a new campaign that is starting,” said researcher Christophe Ventura, research director at the Institute for International and Strategic Relations (Iris). How will this electoral period, which will last until Sunday, October 30, date of the second round of the presidential election, unfold? What will be the main issues? Franceinfo interviewed several Brazilian specialists on this subject.

A schedule yet to be determined

“Tomorrow, I start campaigning”, launched Lula on Sunday evening, promising “more trips and other meetings” until October 30. The calendar for the next four weeks remains to be specified, but we already know that there will necessarily be a televised debate, if they agree to participate”, underlines political scientist Gaspard Estrada, specialist in Latin America at Sciences Po. And to evoke the communication of the candidates on television, at the rate of “ten minutes each day”.He therefore expects a “very dynamic, very tough campaign” between Jair Bolsonaro and Lula.

“The candidates are preparing their meetings and campaign calendars according to the results of the first round”, continues Frédéric Louault, professor of political science and co-director of the Center for the Study of the Americas at the Free University of Brussels (ULB). According to the author of Brazil in 100 questions: the interminable emergence (ed. Tallandier), Lula will for example have to seek votes among the abstainers, and in particular in the south-east of the country, as in the State of São Paolo. The outgoing president won 47.71% of the vote there on Sunday, reports the Brazilian newspaper O Globo*.

Before the first round of voting, the campaign was marred by isolated acts of violence, especially in the last days preceding the vote. A man posing as a voter of Lula was thus fatally stabbed at the end of September, followed the next day by support for Jair Bolsonaro in southern Brazil, recalls France 24.

“There are no real signs of a softening of the campaign. On the contrary, tensions may even intensify.”

According to him, the Bolsonarist militants, already “very radicalized”, “feel comforted by the results of last night” and “authorized to exert pressure and intimidate the opposing camp”. Several “reassuring” points should however be noted. Much of the more local polling in these elections ended last night, reducing instances of violence around these more local campaigns. And “the first round took place without major incident”, points out the researcher.

Beyond the campaign, the results of the second round will also affect the risk of confrontations. For Christophe Ventura, “the more we find ourselves in a scenario where the score will be tight, the more it will be conducive to a scenario of non-recognition by Jair Bolsonaro”. The researcher, evoking “the most radicalized fringes of Bolsonarism who are ready to do battle”, fears “a kind of nihilistic spontaneity which takes over the streets” if Jair Bolsonaro narrowly loses the election. In this case, the role of the army will be decisive in deciding the outcome of the crisis.

The economy at the center of the debate

As the Washington Post points out, these four additional weeks of campaigning will allow Jair Bolsonaro to highlight the improvement in some economic indicators, between the decline in inflation and the unemployment rate. The country’s economic and social situation nevertheless remains serious, with 15% of the Brazilian population now suffering from hunger – Brazil has also made its return to the world map of food insecurity.

In this context, Lula will be able to highlight his record and in particular that of the “Bolsa Familia”, which in the 2000s helped lift millions of Brazilians out of poverty and hunger. The economy promises to be at the center of this campaign for the second round, “and it will be a debate on the balance sheet” between the two leaders, points out Frédéric Louault. The latter recalls that Jair Bolsonaro recently increased aid to the most disadvantaged, until December.

The subject of the defense of democracy and the rule of law will also be at the heart of the debates, adds Gaspard Estrada. For Lula, “this is the central question to attract the centrist electorate of Simone Tebet and Circo Gomes”, center-right and center-left candidates who arrived behind the two finalists with 4.16% and 3.04% of the vote . As for the outgoing president, he should “mobilize on conservative, religious and family values”, as he has done so far. “Lula is very cautious on these societal issues”, conservative circles being very important in Brazil, recalls Christophe Ventura.

Until October 30, in this context of strong polarization, the outgoing president risks keeping his vindictive tone, warn the researchers interviewed by franceinfo. “This is part of the radicalization dynamic of this second round”, sums up Christophe Ventura.

“It’s going to be pretty frontal between them.”

According to the researcher, “Bolsonaro will continue to dig his furrow”, present himself as “the man who represents the people within the corrupt establishment”, Lula having been imprisoned 19 months for corruption before the cancellation of his sentence. As Gaspard Estrada points out, the outcome of the first round must “encourage” him on this path, “because with this speech, he obtained 43% of the votes”.

Will Lula respond with a tougher tone by the second round? “He has no interest in getting into the game of provocation. On the contrary, he seeks to bring people together”, deciphers Frédéric Louault. “He has to play rather low profile, contain himself and attack Jair Bolsonaro on his record.” The specialist also notes that Jair Bolsonaro, on a few occasions, “started to make this gesture, to moderate his speech a little” even if, “of course, there will be attacks. It’s his style”.