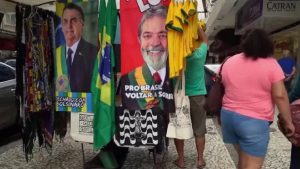 The first round of the presidential election in Brazil was held on Sunday 2 October. Former President Lula came out on top with 48.4% of the vote, while his rival, incumbent President Jair Bolsonaro, is only 5 points behind him. The second round therefore looks more uncertain than expected.

The first round of the Brazilian presidential election was held on Sunday 2 October. The outgoing far-right president, Jair Bolsonaro, thwarted the predictions of polling institutes, which already gave him the loser. He won 43.2% of the vote against 48.4% for his left-wing rival, former President Lula. The latter is now preparing for a battle. “I’ve never won an election in the first round, it seems like fate likes to make me work a little harder,” Lula said.

The second round will be held on October 30

Despite poor management of Covid-19 with more than 680,000 dead in Brazil, the decline of the Amazon forest under his mandate and an ultra-liberal policy, Jair Bolsonaro continues to seduce. A popularity that offered significant support 48 hours before the first round, when footballer Neymar called to vote for the outgoing president while dancing to campaign music by Jair Bolsonaro. Even if Lula’s left remains the favourite, nothing is decided for the second round, which will be held on October 30.