The 20th Congress of the Communist Party of China opened on Sunday October 16 and is expected to re-appoint Chinese President Xi Jinping. This ceremony is an opportunity for China to reaffirm its superpower status but also to hide the limits of a fragile political and economic system. 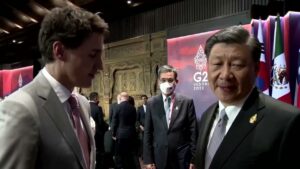 On Sunday, October 16, the 20th Congress of the Chinese Communist Party opened. This ceremony, which takes place every five years, brings together more than 2,000 Party delegates in Beijing and, on this occasion, the Chinese President and General Secretary of the Chinese Communist Party is certain to be reappointed for a third term. So what conclusions can be drawn from these first two terms, and what strategy does Xi Jinping envisage for the next five years?

If the renewal of Xi Jinping at the head of the general secretariat is not in doubt, this 20th congress of the Chinese Communist Party takes on an unprecedented character since the death of the founder of the regime, Mao Zedong in 1976. Indeed, he is the first president since Mao being reappointed for a third term, terms of office at the head of the Chinese Communist Party were limited to two until 2018.

However, do the weakening of the country’s economy, the President’s zero covid strategy strongly criticized by some Chinese citizens and the threats against Taiwan pose limits to Xi Jinping’s hegemony? read more

Today News Post - October 31, 2022 0
Traditionally an exporter of electricity, France finds itself importing it because of the historical weakness of its nuclear production. Every day, the equivalent of...