Since the invasion of their country by Russia, thousands of Ukrainian women have joined the army. Doctors, soldiers, canteens… They too are committed to the victory of their country. 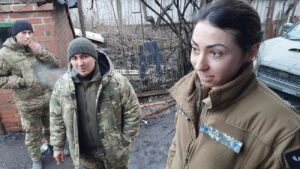 Many women encountered on the Ukrainian front, in the Donbass, are doctors, in the army and the conditions are sometimes really difficult. Victoria treats the soldiers as close as possible to the Bakhmout trenches. His post is located 50 meters behind the front, with the command. And his daily mission is to bring back the wounded and provide them with first aid. But some days, it is not the wounded that she recovers, but the dead, sometimes up to ten. “Fear, I forgot it from my first time, a few months ago, when my best friend died and I had to go get his body. Since then, I’m not afraid anymore.” 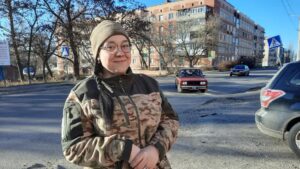 In the midst of this battlefield, Victoria says she’s “not a woman, just a soldier. I have the same responsibilities as men, and besides, I’m not asking for any special treatment. Guys who around me have replaced my father, my mother and my grandmother. They are my new family”. Victoria is 30 years old. From his khaki cap protrude earrings, a long braid, varnish, even on his nails. She explains that it is important to her to be, as she says, in shape and in beauty. “For me, it’s mandatory. When you take care of the wounded, it’s essential to look good. It’s more soothing for the soldiers.”

It is necessary to treat as close as possible to the combats and to feed, also, the soldiers. In a tiny liberated village in the Donbass, a few kilometers from the front line, Katerina the canteen is looking for cottage cheese. She absolutely insists on preparing syrnikis, sorts of small Ukrainian pancakes while we hear the detonations in the distance, where “her guys” are fighting as she says. “I’m from Kharkiv. So I’m not afraid. I’m used to the shelling.” She explains that she chops wood, makes a fire, hot meals… Meals that she only serves to men. “Perhaps because war is a man’s business? She smiles. But there are strong women who defend their country!” She herself was a medalist last week. She proudly shows us the photo. A reward for his involvement and his patriotism. 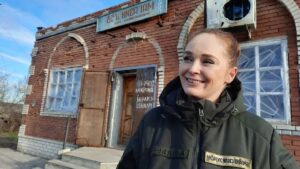 Hard to be a woman in the army at war? Most answer no, except perhaps all the same on a logistical aspect. “The uniform that the army gives us is really made for men and therefore very uncomfortable for us. So I bought my own outfit!” entrusts Katerina, the radiant smile.

In an association based in kyiv, the capital, 500 kilometers from the Eastern Front, Ksenia, 26, devotes her time to equipping the women of the Ukrainian army. “We had these female uniforms made, more flexible, better cut”, explains the young woman. 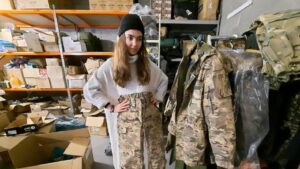 In the trunk of this car which is about to leave for the war, there are 120 metal plates, a little lighter than for the usual heavy bulletproof vest. And in the warehouse, boxes full, soon sent to the women at the front “with hygiene products, and even pocket female urinals!” shows Kesnia. She specifies that she currently receives 30 requests a day from these female soldiers in need of suitable equipment.

About 50,000 women are fighting alongside men in Ukraine and it is a presence that Ukrainians like to highlight. Like in this song that pays homage to them and says: “The girls cut their braids, pack their bags, take up arms.”

But only 5,000 women are really on the front line and rarely in decision-making positions, even if that is starting to change. Katia chats with “guys” in the Donbass She just turned 30, four of whom spent at the Lviv Military Academy. She is now deputy commander of an assault brigade fighting in the Bakhmout trenches. 120 soldiers are under his command. This little young woman, very slender, mainly plays a logistical and psychological role with them, which seems to her quite realistic: “I am not in favor of women fighting, as men do. A scout, for example, would lack strength, and would need help, to remove mines. So everyone has their place in the army and everyone, at their level, will go to victory.”

Katia is actually highly respected by her unit. She was injured in March. “But I was probably the least injured of all, she says, modestly. You could say, I think, that I was born under a lucky star.” And the least we can say is that she is not superstitious. In this base where she lives and works, her previous black cat is pictured on the wall. It was called Nightmare. And the second accompanies him here, near the front of Bakhmout: Satan, by his nickname. Katia is sure of it: black cats bring her luck.