Winter sets in in Ukraine and the cold becomes unbearable but the fighting continues. It is in these difficult conditions that Ukrainian soldiers dig trenches to protect themselves. 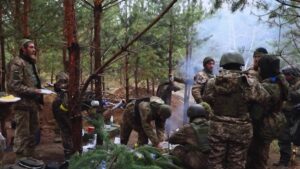 In the heart of the Donbass forest are the first Ukrainian positions. The soldiers dug holes in it to protect themselves from bombs. In the center of the camp, a fire to warm up. “We already had -15°C at night,” said one. Another soldier has his hands swollen from the damp and cold. It takes two hours for the soldiers to dig the holes in which they take refuge. Inside, stoves and electricity. The commander is proud of the ingenuity of his troops.

The cold won’t stop the war

Suddenly, shots ring out. The soldiers start running. Their commander revealed a Russian position to them. The artillery unit sets up and fires in turn. “Our reconnaissance units will quickly tell us if we have reached the target,” explains a soldier. For the commander, the cold will not stop the war. “These men are preparing for temperatures below -20°C in a few days,” says special envoy Agnes Vahramian.