The families of the 228 victims of the Rio-Paris crash are angry. After eight weeks of trial, the prosecution asked the court to release Airbus and Air France. 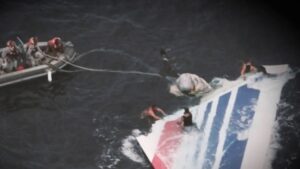 The anger, Wednesday, December 7, of the families of victims of the Rio-Paris crash. “It’s a shame for families,” says Daniele Levy, president of the association Mutual Aid and Solidarity AF447. After nearly six hours of requisition, the two prosecutors asked for the release of the manufacturer Airbus and the company Air France, under the boos of relatives of the 228 missing. In this disaster, neither failure nor negligence, according to the prosecution.

The prosecution swept aside the accusations weighing on the two companies, such as the non-replacement of the Pitot probes, intended to assess the speed, which had frozen. As for the training provided by Air France, it is considered sufficient. The reaction of the two pilots who died in the tragedy is therefore pointed out by the prosecutors. It will be up to the court to decide. The two companies risk a fine of 225,000 euros for manslaughter, after the worst disaster in the history of Air France.

Today News Post - January 4, 2023 0
The photos and videos will be "used to select sites likely to host a moon landing in 2032", explains the Korean Institute for Aerospace...