Vladimir Putin hinted that Russia would not use nuclear weapons first, but only “in response” to a possible enemy strike of this type on its territory. He also announced that 150,000 reservists were deployed in Ukraine. 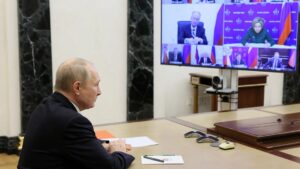 Vladimir Putin during a meeting with members of the Security Council via videoconference at the Novo-Ogaryovo state residence outside Moscow, Russia, on December 6, 2022. (AFP)

Vladimir Poutine acknowledged, Wednesday, December 7, that the conflict in Ukraine was “long” and relativized the risk of a recourse to the nuclear weapon. The Russian president hinted that Russia would not use it first, but only “in response” to a possible such enemy strike on its territory.

The head of the Kremlin also returned to the mobilization of 300,000 reservists, civilians therefore, noting that only half were immediately deployed in Ukraine. The announcement of the mobilization had provoked an exodus of Russians abroad and revealed the army’s serious equipment problems.

Vladimir Putin announces that 150,000 reservists have been mobilized and acknowledges that the conflict will be “a long process”

Russia has deployed in Ukraine nearly half of the men recruited during the partial mobilization of reservists, or about 150,000 soldiers, Vladimir Putin announced. “Of 300,000 of our mobilized fighters, our men, our defenders of the Fatherland, 150,000 are in the area of operation,” said the Russian president during a televised meeting, specifying that 77,000 are deployed directly to the fight. The other 150,000 are still being trained in Russia.

He acknowledged that the conflict in Ukraine was “long”, while boasting “significant results” in reference to the annexation he claims of four Ukrainian regions. “Of course, it’s a long process,” Vladimir Putin said during a televised meeting with his Council for Civil Society and Human Rights, a pro-Kremlin assembly.

Responding to one of his interlocutors, Vladimir Putin noted that “the appearance of new territories” was a “significant result for Russia”. He also referred to the four Ukrainian regions which he claimed to be annexed at the end of September, although Russia only partially controls them and fighting is raging there with the forces of kyiv.

The Russian president hinted that Russia would not use nuclear weapons first, but only “in response” to a possible enemy strike of this type on its territory. “We looked at weapons of mass destruction, nuclear weapons, as a means of defence. [Using them] is built around what is called the ‘retaliatory strike’: if we are struck, we are struck in response” , Vladimir Putin said in a televised meeting.

The President of Ukraine, who embodied his country’s resistance to the invasion of Russia, was named personality of the year 2022 by the American magazine Time, which also paid tribute to the “spirit of Ukraine”.

“Whether the battle for Ukraine engenders hope or fear, Volodymyr Zelensky has galvanized the world in a way we haven’t seen in decades,” wrote Time editor Edward Felsenthal. , for whom the choice had “never been so clear” as this year.

“For proving that courage can be as contagious as fear, for inspiring people and nations to unite in defense of freedom, for reminding the world of the fragility of democracy – and peace – Volodymyr Zelensky and the Spirit of Ukraine are TIME’s 2022 Personality of the Year,” the New York-based magazine added.

“The eight sanctions packages adopted so far are already hurting [Russia]. But today we are increasing the pressure” in response to the war in Ukraine, she said.

This ninth package of measures still needs to be unanimously approved by the 27 EU member countries. The new sanctions will be added in particular to the total embargo on imports of Russian oil transported by sea, which entered into force this week, and to the global cap on the price of Russian oil decided with the G7 and Australia.

Today News Post - October 31, 2022 0
In Madrid, the Prado Museum is embarking on a "transparency operation". He wants to draw up a list of his works of art looted...