The Head of State visited a military building in the harbor of Toulon on Wednesday to define France’s military strategy. 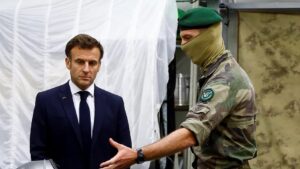 Emmanuel Macron visited a military building in the harbor of Toulon (Var), Wednesday, November 9, in order to present the major strategic challenges that France must face in terms of defense. From the amphibious helicopter carrier Diksmuide, one of the largest French warships, the president notably confirmed the end of the anti-jihadist operation Barkhane.

The new French strategy in Africa will be finalized within six months after consultations, Emmanuel Macron announced. “We will launch in the coming days a phase of exchanges with our African partners, our allies and regional organizations to jointly develop the status, format and missions of the current French military bases in the Sahel and in West Africa” , did he declare.

Withdrawal of troops in August

The French army left Mali in August, after nine years of presence, pushed by the ruling junta. The latter now works – even if she denies it – with the sulphurous Russian paramilitary group Wagner. French soldiers, however, remain in the region and continue to fight against jihadist groups linked to Al-Qaeda or the Islamic State group, which are gradually extending their activities to the countries of the Gulf of Guinea.

The announcement of the end of Barkhane has no immediate consequence on the French military system in the Sahel, which includes around 3,000 soldiers in Niger, Chad and Burkina Faso. It numbered 5,500 men at the height of its deployment.

Today News Post - September 24, 2022 0
Many people don't even know that pickles have many health benefits. Well, most of us think of pregnant women when we think of pickles. But...