The various resolutions taken internationally against Russia in the face of the war in Ukraine were “rapid and simultaneous” greets Benedicte Jeannerod, France director of Human Rights Watch on France Inter. For her, other conflicts deserve the same attention. 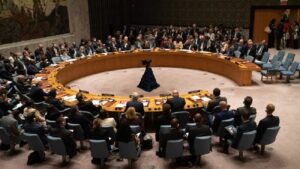 The United Nations Security Council gathered to discuss the conflict in Ukraine on September 22, 2022. (AFP)

The war in Ukraine has triggered “an unprecedented international reaction”, welcomed on France Inter, Benedicte Jeannerod, France director of Human Rights Watch even if “it is not a miracle response”. The NGO publishes its annual report Thursday, January 12.

“The abuses, the atrocities that mark this conflict and the gravity of the violations have triggered an unprecedented international response,” she insisted. “The entire arsenal of the United Nations system on human rights has been activated, she continues, with multiple resolutions of the United Nations General Assembly, with investigations that have been opened by the International Criminal Court and with the suspension of Russia from the United Nations Human Rights Council. “It never happened,” she says, especially since this international reaction “was rapid and simultaneous”. For the France director of Human Rights Watch, it is “quite exceptional” that “the International Criminal Court is opening an investigation with this speed, after being seized by an unprecedented number of States”.

Benedicte Jeannerod, on the other hand, believes that “the various states which are engaged in this massive response should ask themselves questions”.

“What would be the situation today if Vladimir Putin had not enjoyed such latitude for years? In 2014, in Crimea, in 2015, at the time of the atrocities in Syria?”

For her, Vladimir Putin “did not encounter many obstacles in his path when he was already committing very great atrocities”.

A “lack of attention” to Ethiopia or Yemen

Furthermore, Benedicte Jeannerod points out that “this mobilization around Ukraine shows by contrast a lack of attention to other extremely severe human rights crises”.

She takes the example of Ethiopia where the NGO “has documented very large-scale violations in Tigray. For two years, we have documented a policy of ethnic cleansing which constitutes a crime against humanity”. Despite this, “Ethiopia has not been placed on the agenda of the United Nations Security Council, whose role it is to work on this type of situation, due to the blocking of a certain number of ‘States’. The France director of Human Rights Watch also cites Yemen “which also does not benefit from the attention that has been focused on Ukraine”.