The Russian autocrat made this statement during his speech for the new year. 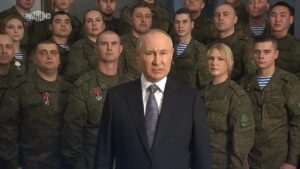 “We will go ahead and win.” Vladimir Putin pronounced an offensive New Year’s greetings on Saturday, December 31, at the end of a year 2022 marked by the invasion of Ukraine by Russian forces. A speech in which the Kremlin autocrat felt that “moral and historical correctness” was “on the side” of Russia.

For Vladimir Putin, 2022 has been marked by “really decisive and important events” which “lay the foundations (…) for our true independence”. “This is what we are fighting for today, protecting our people in our own historical territories, in the new constituent entities of Russia,” he added, referring to the annexation of four regions Ukrainians in September.

“We will overcome all difficulties”

The Russian president also castigated “a real sanctions war” declared on his country by the West. “Those who started it expected the total destruction of our industry, our finances and our transport. That did not happen,” he added. “Together we will overcome all difficulties and keep our country great and independent,” he promised.

According to the Kremlin, Vladimir Putin was speaking alongside soldiers who had fought in Ukraine who had just been decorated. However, doubts have arisen about the real identity of some participants, in particular a woman who seems to pose regularly alongside the head of state and who could work for the Russian security services.

A soldier, a sailor, a devout Christian. God moves in a mysterious way pic.twitter.com/zCDrUgXMIE

This is not her first role .. But most likely this is not just a fake actress .. But an employee of the federal security service pic.twitter.com/f2iUxO8kfP