After the strikes that have hit Ukraine in recent days, kyiv fears new bombardments. 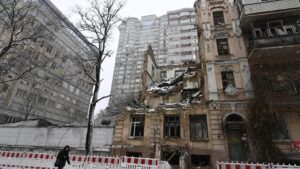 A destroyed building in kyiv, the Ukrainian capital, on November 27, 2022. (AFP)

Ukrainian officials fear new Russian strikes in the coming days. The Organization for the Prohibition of Chemical Weapons said on Monday (November 28th) that the conflict has increased the threat of the use of weapons of mass destruction, including chemical munitions.

Ukrainian officials have said they expect a new wave of Russian bombardment this week. Previous salvos have targeted critical infrastructure and caused massive water and electricity cuts, including in the capital kyiv. “It is very likely that the beginning of the week will be marked by such an attack,” spokeswoman for the Ukrainian army’s Southern Command, Natalia Goumenyuk, said on Monday. She says a Russian missile ship has been spotted in the Black Sea.

After the Russian strikes last Wednesday, millions of Ukrainians were left without power. According to the national operator Ukrenergo, the country is still facing an electricity deficit concerning 27% of households on Monday and emergency cuts are still in force throughout the territory. The kyiv region is 40% deprived of electricity , said its governor, Oleksi Kouleba.

Conflict increases threat of use of weapons of mass destruction

“The situation in Ukraine has once again heightened the real threat posed by weapons of mass destruction, including chemical weapons,” the head of the Organization for the Prohibition of Chemical Weapons (OPCW), Fernando Arias, said on Monday. Threats and allegations about the possible use of nuclear, chemical and biological weapons have been exchanged since the start of the war, but without any evidence that they were deployed.

Fernando Arias reminded Russia and Ukraine that they were among 193 countries that have “solemnly and voluntarily pledged never, under any circumstances, to develop, produce, acquire, stockpile, transfer or use chemical weapons “.

Sexual violence is part of the Russian “arsenal”, says the First Lady of Ukraine

Olena Zelenska claimed on Monday that “sexual violence and sex crimes are part of the” Russian arsenal to “humiliate Ukrainians”. Russia uses sexual violence “systematically and openly”, further accused the wife of the Ukrainian president. “It is for this reason that it is extremely important that it be recognized as a war crime in order to prosecute all the aggressors”, she added during a conference against sexual violence during conflicts, organized in London.

The EU will sanction the circumvention of its sanctions against Russia

European governments adopted on Monday the decision to consider as “a crime” the violation of European sanctions against Russia, announced the Czech Presidency of the Council of the EU. This decision will make it possible to sanction third countries, as well as their nationals or their entities, guilty of circumventing the sanctions adopted by the European Union.

The Europeans have adopted eight sets of sanctions, including a halt to their purchases of oil and coal, in order to deprive Moscow of its sources of financing for the war in Ukraine. But Turkey is regularly accused of circumventing European sanctions and setting up a circuitous route to transport Russian oil to EU countries despite the European embargo.

Today News Post - November 11, 2022 0
In the United States, abortion is now illegal in 11 states. So some women go to neighboring states to be able to have an...

United States: confidential documents dating back to the vice-presidency of Joe Biden found in Washington