The leaders of the EU and Balkan countries demonstrated at a summit their desire to give new impetus to their relations. For his part, Volodymyr Zelensky went near the front, not far from Bakhmout, the main battlefield in eastern Ukraine. 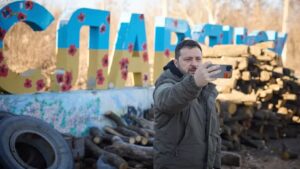 Ukrainian President Volodymyr Zelensky visited on Tuesday, December, not far from Bakhmout, the main battlefield in eastern Ukraine where the army has been resisting a Russian offensive for months.

This move comes at a time when Russia accuses its neighbor of increasing drone attacks against airfields on its territory, which Washington has however declared “not to encourage”.

At the same time, the Twenty-Seven met at a summit in Tirana (Albania) with the leaders of six Western Balkan countries in order to reinvigorate a partnership deemed even more essential in the context of the war in Ukraine.

The EU wants to reassure the Balkans, strengthen ties against Moscow

The leaders of the countries of the European Union and the Western Balkans showed in Tirana their desire to give new impetus to their relations, through concrete cooperation, even if enlargement is still a distant prospect. The President of the European Council, Charles Michel, considered this EU-Balkans summit “historic”, the first of its type to take place in the region.

“Our children’s future will be safer and more prosperous with the Western Balkans inside the EU, and we are working hard to make progress,” said Charles Michel arriving at this summit, the first of this type to take place in a State of the region.

These countries, stuck in the antechamber of the EU for years, have often expressed their frustration at the length of the integration process, most recently seeing the EU rapidly grant candidate status to Ukraine and Moldova. But the war in Ukraine has also underlined the importance for Europeans of stabilizing this fragile region of southeastern Europe, of countering Moscow’s influence there.

Do not “humiliate” Russia and grant it security “guarantees” in the future: Emmanuel Macron defended himself from any missteps after sparking a new controversy by outlining the outlines of post-war Ukraine.

“I think we should not make big cases, try to create controversy where there is none,” reacted the French president on the sidelines of the EU-Balkans summit in Tirana. “I have always said the same thing, that is to say that at the end, in the peace talks, there will be territorial issues on Ukraine – and they belong to the Ukrainians – and there will be collective security issues throughout the region,” he added.

Volodymyr Zelensky visited the Donbass, near the front

The Ukrainian president went not far from Bakhmout, the main battlefield in the East, where the Ukrainian army has been resisting a Russian offensive for months. He released three videos of him in the Donbass, a region which Moscow claimed for annexation in September, without however controlling it completely.

“Eastern Ukraine is the most difficult axis [of the front],” he told soldiers on the occasion of the day dedicated to the armed forces. “Thank you for your resilience,” he added, before presenting decorations to some of these men.

Not far away, in the pro-Russian stronghold of Donetsk, six civilians were killed in Ukrainian strikes, according to local authorities.

This trip by Volodymyr Zelensky also comes at a time when Russia accuses its neighbor of increasing drone attacks against air bases on its territory, which Washington has however declared “not to encourage”. kyiv does not claim responsibility for these strikes.