The occupation authorities evoke both the evacuation of troops and the desire to defend the city. Ukrainian forces expect fierce street fighting, without giving up hope of retaking the city before winter. 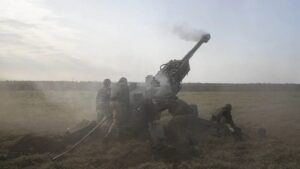 No ferry now connects the two banks of the Dnipro. Occupation authorities in the Kherson region of southern Ukraine announced the end of evacuation shuttles from the city on Tuesday (November 8th). The day before, Kirill Stremoussov, deputy head of the occupation forces, had again called on the maximum number of inhabitants to “leave” the city, conquered by Russia in the first days of the war. Last Friday, Vladimir Putin himself declared that the entire population had to be evacuated. Before that, the Russian occupiers had announced the transfer of 70,000 people to the right bank.

After power cuts (caused by Ukrainian strikes, according to the occupier), power was partially restored in the city. For its part, kyiv assures that these lines were cut by the enemy itself in order to force residents to take the path of Russian territories. “The water and heating supply has been restored, as has the sewage system,” the occupation authorities announced on Monday, but repair work is continuing.

While the Ukrainian army is slowly approaching, locality by locality, the city is still in the status quo. Communication on ongoing operations is now locked, and experts are lost in conjectures on the imminence of an assault on the regional capital. “In some places, enemy equipment positioned in a column was noticed,” said Kirill Stremoussov. Perhaps he is referring to a video that appeared on social networks, where a ribbon of khaki green vehicles stretches.

The Kremlin has already prepared language for the regime’s propagandists, reports the independent Russian site Meduza (link in Russian) which was able to consult the documents. The situation in Kherson is described as “the most difficult for the Russian army at the current stage of the special operation”.

In response to these Ukrainian “preparations”, the Russian forces claim to have transformed the area into a vast fortress. By exploiting satellite images, the analyst Benjamin Pittet notably identified three defensive lines on the left bank of the Dnipro. In this complex system of trenches and fortifications, sometimes at the edge of the river, sometimes 15 km behind, positions have been set up to allow the parking of armored combat vehicles.

The Russians are currently building three lines of trenches and bunkers on the right side of the Dnieper. These defensive positions use natural and artificial barriers such as the Dnieper River and the numerous canals in the Kherson region.
2/ pic.twitter.com/aHyhTR9J1b

Despite internet shutdowns, a few rare images of the city appear on social networks. Kherson appears deserted, as if abandoned. Ten days ago, the local administrations had already been relocated to the other side. Then the Russian security forces removed several checkpoints last Friday, while the Russian flag was removed from the building of the regional administration. Some images also show boats sunk by the Russians on the river – which could suggest a desire to prevent Ukrainian forces from crossing the Dnipro, after a possible reconquest of Kherson.

A confused military situation in the city

But all this is a trap, according to the Ukrainian general staff. This one affirms, on the contrary, that the Russian army swapped the trellis for civilian outfits, settling in residential areas while reinforcing its positions. This feeling prevails among the troops. “What we mentioned in the press, that they left, these are fake news”, replied a Ukrainian fighter last week. We are going to have street fights, because they do not want to withdraw.” According to a Ukrainian official, the clashes will be violent: “The toughest battle will take place in Kherson.”

“The enemy is trying to convince us that he is leaving populated areas by creating the effect of a total evacuation…but this may be military maneuvers.”

Contradictory information circulates on the movements of Russian troops: some units would have left the city, but others would arrive in support. “Certain elite Russian units, such as airborne forces and naval infantry, would continue to operate on the right (west) bank of the Dnipro river”, ( pointed out in early November) , the Institute for the Study of War (ISW), a group of American experts. Besides, no one really knows how many people still live in Kherson. Some Ukrainian media claim that they would still be 70,000, against 280,000 before the war.

In the meantime, looting is increasing in the city. The director of the Oleksiy-Shovkunenko museum notably accused the Russian forces of having taken all or part of the collection of works of art, between October 31 and November 3, and of having transferred them to Simferopol, in annexed Crimea. The remains of the city’s founder, Grigory Potemkin, were taken away, as were statues. Russian troops transfer “ambulances, tractors and private cars”, The regional building was emptied, and moving trucks were reported at many locations in the city.

“While Kherson residents are forcibly evicted from their homes, under the guise of evacuation, army and FSB officers are doing what they love most: robbing their homes,” commented Mykhailo Podolyak, adviser Ukrainian presidential.

The days drag on, the wait too. The Ukrainian counter-offensive, launched at the very end of August, has so far resulted in the reconquest of 1,200 km2 of territory. And at the end of October, the Ukrainian army claimed to have taken over 90 localities in the region. However, progress has been slower for several weeks. Ukrainian Defense Minister Oleksiy Reznikov cited heavy rains that turned the ground into slush. This agricultural region, he explained (in Ukrainian), has “many irrigation canals which the enemy uses as trenches”.

kyiv, however, maintains its ambition to retake the city before winter. In an interview with The Drive site , Kyrylo Boudanov, head of the Main Intelligence Directorate of the Ministry of Defense, talks about the deadline of “the end of November”. According to him, 40,000 Russian soldiers are gathered in the sector, whether on the western bank (Kherson and the surrounding area) or on the eastern bank. Unable to evacuate, Kherson could then turn into a “cauldron” for the stationed Russian troops.

The fate of the Kakhovka dam, 60 km further north, is also the subject of much speculation. Its destruction would result in devastating floods in the region. Occupation authorities say a Ukrainian missile hit a lock on Sunday, but did not cause critical damage to the infrastructure. Two weeks ago, Ukrainian President Volodymyr Zelensky accused Moscow of having “undermined the dam” in order to blow it up if necessary, depending on events.

Today News Post - November 9, 2022 0
Sepp Blatter regretted the awarding of the 2022 World Cup to Qatar, in an interview with the German agency SID. Sepp Blatter at the exit...