Buckhead’s committee chairman is preparing a divorce from the municipality of Atlanta, Georgia, USA. The inhabitants of this upscale neighborhood want to distance themselves from the current political system. 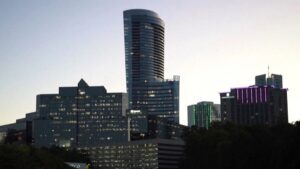 The guests at a small reception are white, wealthy and Trumpist. They all live in Buckhead, a district of Atlanta, the capital of the State of Georgia, in the United States. Between glasses of champagne and petit fours, the discussions focus on politics. They all claim the independence of their neighborhood and want to distance themselves from the current political system. The main concerns of this white electorate are immigration and insecurity. “We have problems in the neighborhood. We are afraid that people will break into our homes,” says a resident.

The idea is to secede

The chairman of the Buckhead committee is preparing a divorce from the municipality of Atlanta. The idea is to secede, like in the days of the Confederates, when the Southern states were at war with the Northern states. “We are going to love our police, we are not going to increase taxes, we are even going to lower them”, affirms Bill White, the chairman of the committee, Tuesday, November 8. This area of Atlanta, known for its modern shopping malls, is nevertheless a rather peaceful place. But the secession project defended by the Buckhead committee is far from being an isolated example in the United States. For the experts, the polarization between two opposing camps and misinformation further accentuate the differences.

Today News Post - November 20, 2022 0
As representatives of 88 countries gathered in Djerba, Tunisia, Emmanuel Macron took the opportunity to talk about the war in Ukraine, but also about...