Democrats and Republicans clash over immigration in midterm elections. To provoke them, Republican governors have sent hundreds of migrants by plane or by bus to major Democratic cities. 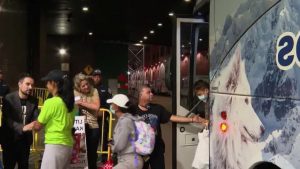 For several weeks, migrants have been arriving in the heart of the major democratic cities of the North. New York, Chicago or even Washington, notably at the foot of the residence of the Vice-President of the United States, Kamala Harris. The buses contain on board exclusively migrants sent by the conservative states of Florida or Texas, more than 2,000 km away. Some were also flown in.

Two Republican governors behind the maneuver

“They told us that we would have accommodation, work, food and a prepaid card with money on it. But all of that was lies,” said a Venezuelan migrant. Taken aback, humanitarian associations and local authorities are flabbergasted. Two Republican governors are behind the maneuver. They paid for the transport of migrants from their budget. Ron Desantis, the governor of Florida, assumes his blow, and even welcomes it. Migrants claim they were not forced.