The information transmitted on the war in Ukraine is subject to more and more manipulation. European media have even been fooled twice by images from video games. 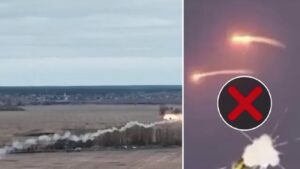 It’s a war video game. The goal is to target the enemy, shoot them down, pulverize tanks and helicopters. Some excerpts from these games can be found on social networks. Images so close to reality that they are presented as if they were real scenes of war in Ukraine. These images are taken from a game. The Malian account that publishes them is pro-Russian, it is quite followed, very commented, very shared.

Some media get fooled

The image has been degraded to blur the details. The Internet user can therefore believe in the reality of this sequence. Ukrainian tanks allegedly destroyed by a Russian strike. But if you zoom in, the fact that it’s a game is obvious. Experts are not mistaken. Some media are fooled, such as Spanish and Romanian television. By mistake or for propaganda purposes, the Ukrainian Ministry of Defense also released a fake image, taken from a game. The video is still online.

Today News Post - November 6, 2022 0
Democrats and Republicans clash over immigration in midterm elections. To provoke them, Republican governors have sent hundreds of migrants by plane or by bus...

War in Ukraine: Vladimir Putin describes the situation in the annexed Ukrainian regions as “extremely difficult”