Dina Boluarte took over the leadership of the country after the dismissal of President Pedro Castillo, accused of an attempted coup after he announced the dissolution of Parliament, which was trying to bring him down. 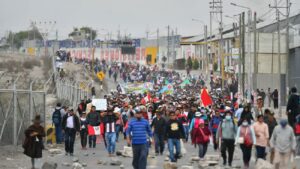 The situation remains very unstable in Peru, five days after the attempt by the president, Pedro Castillo, to dissolve the Parliament, opening a serious political crisis. Two demonstrators died on Monday, December 12, in Arequipa, in the south of the country, and in Chinchero (southeast), during demonstrations against the new president, Dina Boluarte.

This brings the total number of deaths in the past 36 hours to four, announced the Mediator of the French Republic, Eliana Revollar.

One of the fatalities occurred in Arequipa, Peru’s second city, when police intervened to chase hundreds of protesters from the airport who had set up burning barricades on the runway. The other victim died during a march repelled by riot police in Chinchero, in the Apurimac region, birthplace of Dina Boluarte, and where two protesters died on Sunday.

The protesters demand the resignation of the new president Dina Boluarte and the release of her predecessor, Pedro Castillo, accused of having fomented a coup d’etat by trying to dissolve parliament.

Today News Post - October 9, 2022 0
Austria holds a presidential election on Sunday that is expected to be won by incumbent Alexander Van der Bellen, seen as a beacon of...

Germany: three years after the burglary of a museum in Dresden, the police are still looking for part of the loot