The prosecutor’s office in Lille (Nord) has opened an investigation for endangering the lives of others. 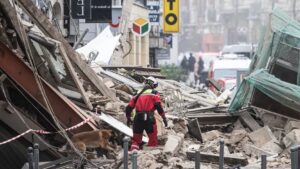 Two buildings in downtown Lille (North) collapsed on Saturday, November 12, early in the morning. A three-story building under construction collapsed, causing the neighboring building to fall, around 9:15 a.m., in rue Pierre-Mauroy, a very busy street in the city, an hour before the shops opened. Most residents were evacuated but firefighters are still looking for someone. The Lille prosecutor’s office has opened an investigation for endangering the lives of others.

According to the socialist mayor of Lille, Martine Aubry, present on the spot Saturday morning, a dozen people had been evacuated a few hours before the collapse. “A young man came home at 3 a.m. and he realized that the wall was warped” and the door was open, she said. He then warned the municipal police and the firefighters, who decided to evacuate a building, the other seeming empty, considering “that there was a real risk”.

“When I left home at 8 p.m. on Friday evening, there was no sign that it was going to happen,” the 22-year-old young man told France Bleu Nord. On returning, he finds that one of the walls in the entrance hall is badly damaged. “I went to see my two roommates, we realized that the building had moved, because we could no longer open the door at the top and we heard rubble falling,” he continues. He alerted the fire department, who arrived within minutes.

“I was still awake when the firefighters started pounding on the doors, but I thought they were revelers and I stayed in bed,” resident Benjamin Lopard, 35, told AFP. , who posted photos of the hall on Twitter. “When the police arrived, I realized it was serious,” adds the young man, who left around 5:30 a.m. with his papers, his computer and a change of clothes. “I now realize how incredibly lucky we were,” he said, without this evacuation “we would all be in wooden boxes.”

“I’m still shaking, because if that night this gentleman hadn’t come home at 3 a.m. and hadn’t joined us, and if we hadn’t had these reactions, there would have been deaths this morning at the ‘obvious,’ said the PS mayor of Lille, before the announcement that a resident was missing.

One person missing and one person slightly injured

In the early afternoon, firefighters announced they were looking for a missing doctor. “We are almost certain that this person is in the rubble, said Lieutenant-Colonel Stephane Beauventre. His phone does not answer, his car is in the parking lot, (…) and he did not take his penalty”. “We are concentrating all our efforts on (…) extracting the rubble by hand to access this victim,” he added. Another person, slightly injured, was extracted from the rubble, announced the departmental fire and rescue service of the North.

Initially mentioned, the trail of a gas leak was quickly ruled out. “It’s more a building problem, it seems,” Martine Aubry told reporters. The mayor of Lille clarified that she had taken “a decree of imminent danger”. The neighboring buildings were also evacuated on Saturday morning “as a precaution”. “There was no particular alert on this building, it was not a building affected by insalubrity”, told AFP the Minister Delegate for Housing, Olivier Klein.

The Lille prosecutor’s office has opened an investigation for “endangering the lives of others” after the collapse on Saturday morning. “A judicial expertise has been commissioned to shed light on this case,” added the prosecution.

Today News Post - October 22, 2022 0
Under pressure from Ukrainian troops, pro-Russian leaders have just called for the emergency evacuation of the population. Is it to make way for the...