The Chinese head of state reprimanded the Canadian for having “told the newspapers” the content of a private conversation on “the question of interference” by Beijing in the democratic and judicial systems of Ottawa. 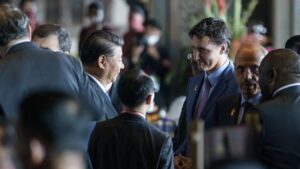 The scene is rare for the general public. In a tense face-to-face, unofficial, but in front of the cameras at the G20 summit in Bali, we can see and hear Xi Jinping come out of his apparent phlegm to berate Canadian Prime Minister Justin Trudeau. The tone is dry, sometimes chilling, but always cordial.

>> War in Ukraine, North Korea, climate … What to remember from the meeting between Joe Biden and Xi Jinping before the G20

The exchange lasts a minute, and its starting point is the supposed leak in the press of the details of an interview the day before between the two men who have already strained relations. The Canadian Prime Minister said he raised during this meeting “the question of interference” Chinese after Ottawa accused Beijing of interfering in its democratic and judicial systems. Xi Jinping replies, “Going to tell the newspapers what we said in our conversation is not appropriate.”

In a calm tone and with a smile, the president speaks in Chinese and continues: “And besides, that’s not the way the discussion went”. In a moment of hesitation, the two men face each other, but not straight in the eye: they listen as their words are translated into English by interpreters. “If there is sincerity (on your part), then we should have a discussion based on mutual respect. If that’s not the case, it’s hard to expect too much,” Xi Jinping continued.

With one step, the Chinese president then tries to leave the conversation – without waiting for the end of the translation of his remarks into English – but the Canadian Prime Minister then calmly slips: “In Canada, we believe in free, open and frank, and that’s what we will continue to do. We will continue to seek to work together in a constructive way, but there will be things on which we will not agree”, he underlines, before shake hands with the Chinese president. “It’s up to you to create the conditions (necessary for the improvement of relations)”, repeats twice, finally, Xi Jinping, who keeps smiling.

“Having a frank dialogue is not a problem for China”

The Canadian Prime Minister is under pressure in his country: in addition to revelations from the press, the Canadian federal police indicated Thursday, November 10 to carry out an investigation into supposed “police stations” set up illegally by China in Canada to control in particular Chinese exiles or expatriates. And this public estrangement is not likely to fix already very strained relations.

Asked Thursday, November 17 about this video during a regular press briefing, a spokesperson for the Chinese Ministry of Foreign Affairs, Mao Ning, minimized its scope. “The video (…) contained a brief conversation between the leaders of the two countries during the G20 summit. This is something normal,” she said. “I don’t think this should be construed as a criticism or a reprimand of anyone from President Xi,” she said. “Having a frank dialogue is not a problem for China. We let’s just hope that this frank dialogue is based on equality and mutual respect, rather than rife with condescending accusations.”

Tuesday’s meeting between Xi Jinping and Justin Trudeau was the first face-to-face dialogue between the two leaders since 2019. Relations between Beijing and Ottawa have deteriorated sharply in recent years, especially after the arrest in 2018 by the Canada, at the request of the United States, of the financial director of Huawei, Chinese telecom giant. Despite a relative easing following his release last year and that of two Canadians who were arrested in retaliation, recent weeks have seen a further hardening of relations.