Deputy Nicolas Dupont Aignan, a fervent activist for the reintegration of excluded health professionals during the health crisis, says that the State of New York imposes the reintegration and compensation of all unvaccinated caregivers. 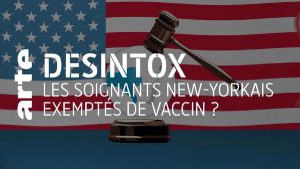 Has a New York court overturned the exclusion of unvaccinated caregivers against Covid-19?

This is affirmed by MP Nicolas Dupont Aignan, a fervent activist for the reintegration of health professionals excluded during the health crisis. “At a time when the Supreme Court of the State of New York imposes the reinstatement and compensation of all unvaccinated caregivers, Emmanuel Macron dares to complain about the lack of doctors, while refusing to reinstate thousands” , writes the president of Debout la France on Twitter.

In reality, the politician, mixes the brushes. Indeed, the decision rendered by the Supreme Court of the State of New York, this October 24, does not concern health professionals, but municipal maintenance workers. And not all: only sixteen of them, who had challenged their dismissal in court.

The Supreme Court judge considered that their exclusion was “arbitrary”, in particular because the city finally exempted private employees from the vaccination obligation. The magistrate also claimed that “the vaccine did not prevent contamination” and that it was unfair to punish officers who had simply refused to protect themselves. Before specifying that this “is not a comment on the effectiveness of vaccination, but on the way we treat our front-line employees. »

If the lawyer for the employees considers that the decision could, in the long term, allow the reinstatement of all the civil servants suspended by the city of New York, he adds that it “concerns only the [16] plaintiffs”. To know the end of this story, we will have to wait: the city has announced that it has appealed this decision.

Today News Post - November 5, 2022 0
The stampede that killed 153 people in Seoul, South Korea, on Saturday October 29, is not an isolated case. Similar events have already taken...