Two men have been hanged after being found guilty of killing a paramilitary during the protests that recently rocked the country. 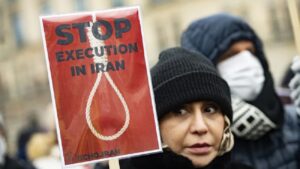 A demonstration against the Iranian regime, on December 17, 2022 in Berlin (Germany). (AFP)

Iranian justice announced the hanging, Saturday, January 7, of two men found guilty of having killed a paramilitary during the demonstrations triggered by the death in custody of the young Iranian-Kurdish Mahsa Amini. These hangings bring to four the number of executions since the start of the protest movement in Iran in mid-September.

The two men were accused of killing Ruhollah Ajamian on November 3, 2022 in Karaj, west of Tehran. This man was a member of the Bassidji militia, an organization linked to the Revolutionary Guards, the ideological army of Iran. A court of first instance had sentenced them to death on December 4 and the Supreme Court of Iran had confirmed their sentences on January 3.

Sentences from Paris and Brussels

France “condemns today’s executions in the strongest terms”, reacted the Ministry of Foreign Affairs on Saturday afternoon. “The execution of demonstrators cannot take the place of a response to the legitimate aspirations of the Iranian people for freedom. The minister told her Iranian counterpart on December 20,” adds the Quai d’Orsay. The European Union said it was “appalled” by the executions. It “once again calls on the Iranian authorities to immediately put an end to the highly reprehensible practice of pronouncing and carrying out death sentences against demonstrators” and to “quickly quash the recent death sentences already handed down in the context of the demonstrations”.

Since the beginning of the protest movement, justice has sentenced 14 people to death in connection with the demonstrations, according to an AFP count based on official information. Among them, four have been executed, two have had their sentences confirmed by the Supreme Court, six are awaiting new trials and two others can appeal. Activists say dozens more face charges that carry the death penalty.

Today News Post - December 10, 2022 0
As the two nations face off in the quarter-finals of the competition on Saturday December 10 at 8 p.m., the fans are already in...