The 70-year-old politician was injured Thursday in a shooting in Wazirabad (east of the country) on November 3. 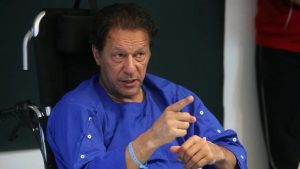 Former Pakistani Prime Minister Imran Khan accused his successor Shehbaz Sharif on Friday (November 4th) of being involved in a plot to kill him, while he was recovering in hospital from bullet wounds received the day before during a a political meeting in Wazirabad (east of the country). Perched on a tank with his supporters, he had been wounded in the foot after automatic weapon fire.

Imran Khan, 70, claimed his successor, who replaced him in April after he was overthrown in a no-confidence motion, was behind the assassination attempt along with Home Minister Rana Sanaullah, and a senior military official. “These three decided to kill me,” he said in a televised address on his party’s Youtube channel, from his hospital bed in Lahore (East), for his first public appearance since the attack. of Thursday.

Denounced as a “heinous assassination attempt” by Pakistani President Arif Alvi, this attack has not been claimed. Accused by Imran Khan, the government has strongly rejected these allegations, pointing the finger at a suspect who would have been motivated by religious considerations.

This attack, which left one dead and at least ten injured, further heightens the tension in a country plunged into a deep political crisis since Imran Khan was ousted from power. The latter had been leading a “long march” for a week bringing together several thousand of his supporters between Lahore and Islamabad, the country’s capital, demanding the organization of early elections – a first step in his plan to regain power. power.