In the club of correspondents, todaynewspost is interested in news seen from abroad. Today, head to South America to find out what Colombia, Chile and Argentina expect from the presidential election in Brazil. 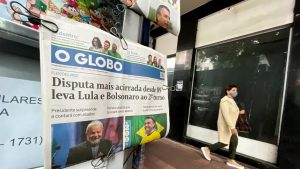 The daily O Globo the day after the first round of the presidential election in Brazil, October 3, 2022. (MAURO PIMENTEL / AFP)

The left-wing candidate Lula came out on top in the first round of the presidential election in Brazil on Sunday October 2. Favorite in the polls, he is only five points ahead of outgoing far-right president Jair Bolsonaro. Both will be decided on October 30 in the second round. The governments of Colombia, Chile and Argentina, three countries ruled by the left, are hoping for a victory for Lula. And each time for different reasons.

In Colombia, the protection of the Amazon at the heart of hopes

In June, Colombia elected a left-wing president for the first time in its history, with the coming to power of Gustavo Petro. The country then hopes for change, and in particular on the environmental issue. For several years, the Amazonian forest has not ceased to burn, and in particular because of deforestation linked to intensive agriculture and livestock farming. According to the United Nations (UN), Colombia lost 7,018 km2 of this forest between 2018 and 2021, most of it destroyed in the Amazon.

The protection of this forest is essential for the new president. He wants to act quickly and proposes the creation of an emergency fund for the Amazon of about 500 million dollars per year, over a period of 20 years. To do this, it counts on the support of its neighbours, in particular Brazil and Peru, which share borders with Colombia. Gustavo Petro wants to ask rich countries and big companies to pay farmers to take care of the Amazon rainforest and recover deforested areas. The initiative will be brought to the next UN climate COP to be held in November in Egypt. The Colombian president hopes to have the support of other presidents in the region to weigh in, and in particular the Brazilian president.

On this subject, the left-wing candidate Lula has similar opinions. The two know each other and align on other matters as well. Lula evokes the strengthening of the Community of American and Caribbean States (CELAC), left by outgoing President Jair Bolsonaro because the institution, according to him, put forward “non-democratic regimes”. Gustavo Petro therefore hopes for the return of Brazil to the organization.

In Chile, the hope of creating a South American “pole of the left”

In Chile too, the young left-wing president, Gabriel Boric, hopes for Lula’s victory to calm relations between the two countries, which nevertheless maintain significant trade. Since the beginning of the year, relations with the government of Jair Bolsonaro have deteriorated. It started in March, during the Chilean president’s inauguration ceremony: Jair Bolsonaro did not go there because he did not want to “create problems.”

A few months later, the Brazilian president attacked Gabriel Boric more frontally, accusing him of having set fire to the metro during the social crisis which had shaken the country in 2019. False remarks, “unacceptable and which affect the brotherhood between the two peoples,” Chile said at the time. There was also the episode of the Chilean ambassador to Brazil. Gabriel Boric had appointed a member of his coalition to this post. The latter had in the past declared that with Bolsonaro it was “the beginning of fascism.” The Brazilian administration did not approve this appointment, so Chile finds itself without an ambassador.

Beyond these tensions, the Chilean president and Lula come together from an ideological point of view. Gabriel Boric sees here the possibility of building a “pole of the left” for Latin America. He wants to strengthen regional cooperation so that the continent weighs more on the international scene. Even if he insists on overcoming ideological divisions, the Chilean president sees with great hope the creation of an axis of the left with the recent progressive governments of Gustavo Petro in Colombia, Alberto Fernandez in Argentina, Luis Arce in Bolivia, and, perhaps, Lula in Brazil.

In Argentina, the hopes of feminist activists and associations

In Argentina, another Latin American country led by the left and very committed to the issue of the rights of women and minorities, the result of the first round of the presidential election in Brazil was disappointing, despite Lula’s first position. The Argentines hoped for his victory in the first round. It must be said that the incessant spades sent by Bolsonaro against the Argentines, or even his misogynistic, homophobic and racist remarks have contributed to making him very unpopular in the country. In associations, the reaction is mixed: on the one hand there is the hope of seeing a progressive front arrive at the head of the country, but at the same time, there is the disappointment of seeing the bolsonarist right that they call “fascist” in Congress.

These results could also influence the feminist movement in Argentina. Because even if activists fight first for the extension of rights in their country, there is indeed a regional South American feminism, as journalist and feminist activist Laura Salome explains: “Next year, there will There are elections in Argentina. For us, the defeat of Bolsonarism, of fascism, of the extreme right, is the hope of not seeing the growth of seats on the same side in Argentina. And in recent days, by talking with feminists in Brazil, we were able to develop strategies on what the struggle of tomorrow will be: anti-racist and anti-fascist feminism, that is our goal from now on.”

Just as progressive South American governments dream of a left-wing front in the region, associations are also betting on unity, making the election in Brazil a decisive event in future regional feminism.