After the passage of the tornadoes, Sunday, October 23, in the North, many homes in Bihucourt, in the Pas-de-Calais, and Conty, in the Somme, are in the open. Stunning images of the disaster. 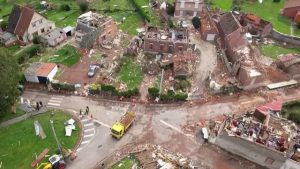 A village is in ruins in Pas-de-Calais, Monday, October 24, disfigured in barely 30 seconds by the tornado that occurred on Sunday. The towns of Bihucourt (Pas-de-Calais) and Conty (Somme) are unrecognizable. The houses there are open to the sky, most of the roofs have been gutted. From the sky, we can see the furniture, almost all the personal effects of the victims. Some try to find things that are dear to them in the rubble. From up there, the impressive images filmed with a drone on Monday, October 24, reveal an unrecognizable neighborhood.

Rebuild before the rain

The smashed bricks on the ground turn the bitumen red. The church of Bihucourt, built in 1920, is gutted. Its vault crashed into the nave. In Conty, the primary school was completely devastated. Fortunately, the tornado happened on Sunday, so no students were present. In all, 80 houses in the commune of the Somme are damaged. On Monday evening, craftsmen are rushing to cover the roofs in balance before the next rains.

Today News Post - October 31, 2022 0
More than 500 filter dams aimed at controlling coaches had been recorded by midday across the country, according to a Brazilian media. The left...