This estimate, coming from “external sources”, included both the killed and the wounded, justified the institution after removing this passage. kyiv had reacted strongly to these declarations, judging this initial assessment to be erroneous. 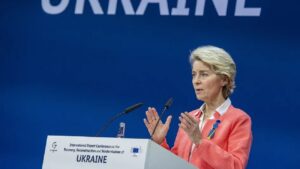 The President of the European Commission, Ursula von der Leyen, during a conference on the reconstruction of Ukraine, October 25, 2022. (DPA)

Misunderstanding between Brussels and kyiv. European Commission President Ursula von der Leyen said on Wednesday (November 30) that 100,000 Ukrainian servicemen had been killed “so far”, along with 20,000 civilians. But this passage was subsequently deleted from the text published on the European Commission’s website. A video was also unpublished from social networks before being replaced by another, rid of the mention of Ukrainian losses.

A spokesperson for the institution, Dana Spinant, then published an update, assuring that this estimate included both soldiers killed and wounded.

Many thanks to those who pointed out the inaccuracy regarding the figures in a previous version of this video.

The estimation used, from external sources, should have referred to casualties, i.e. both killed and injured, and was meant to show Russia‘s brutality. https://t.co/GesDe7bK8v

Ursula von der Leyen’s remarks sparked strong reactions in kyiv. “We cannot confirm this figure”, reacted the army, questioned by Ukrainskaya Pravda. “We asked the European Commission where Ursula von der Leyen got this information from,” also reacted a spokesperson for the Ukrainian presidency, Serhiy Nikiforov. He denounced a figure “extremely far from reality”, in an interview with the media Hromadske.

In wartime, Russia and Ukraine are reluctant to give figures on their combat losses. Serhiy Nikiforov recalled that only the Commander-in-Chief of the Armed Forces, the Minister of Defense, or the President are authorized to communicate such information, qualified as “sensitive”. He added that President Volodoymyr Zelensky will release official data on Ukrainian casualties “when the time is right”.

This figure of 100,000 dead is already taken up by many Russian media and Telegram channels, which read there a proof of failure for kyiv, without taking into account the correction made by the European Commission.

Ursula von der Leyen, moreover, estimated the damage suffered by Ukraine at around 600 billion euros. “Russia must pay for its horrible crimes”, she added, proposing the establishment of a “special tribunal supported by the United Nations”, in order to investigate “the crimes of aggression of the Russia” against Ukraine. This call was welcomed by kyiv.

Today News Post - November 9, 2022 0
The midterm elections in the United States on Tuesday, November 8 represent a major issue in a divided country. Democrats and Republicans try every...